Researcher cautions against vaccinating people who already had COVID 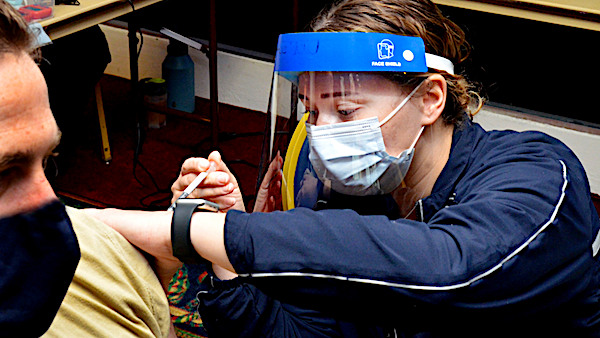 A prominent physician-scientist is warning that the indiscriminate vaccination of people with previous or recent COVID-19 infections might have caused the blood clotting complications that resulted in the pause in the distribution of the Johnson & Johnson vaccine.

Dr. Hooman Noorchashm said in an interview Tuesday on “Tucker Carlson Tonight” that such complications aren’t isolated to the Johnson & Johnson vaccine, noting cases entered in the federal database, VAERS, regarding the Pfizer and Moderna vaccines.

Carlson noted that Noorchashm previously has said that while he has high confidence in the vaccines, not everyone should take them. He particularly is concerned about people with high levels of antibodies from a previous COVID-19 infection.

The Fox News host asked if the government is taking his warning seriously now.

“Well, I haven’t seen any evidence that they are taking it seriously, frankly,” Noorchashm replied.

“We shouldn’t underestimate what the effect of a vaccine-driven immune response is on the tissues of people who have been previously infected.”

He urges the FDA and the CDC to inform the American people as to whether or not the six young women who had severe adverse reactions to the Johnson & Johnson vaccine had antibodies in their blood.

“I think it’s a major mistake to assume that you can put this vaccine into people who have been recently or currently infected and expect that no complications will result,” he said.

Noorchashm, who specializes in cardiothoracic surgery, has taught and practiced medicine for nearly two decades. He has held faculty positions at the University of Pennsylvania School of Medicine, Harvard Medical School, Thomas Jefferson University Hospital and the Philadelphia VA Hospital.

He’s the author of more than 65 articles, abstracts and reviews in peer-reviewed medical journals, including the New England Journal of Medicine, Journal of Immunology, Nature Medicine, American Journal of Transplantation, Critical Care Medicine and Diabetes.