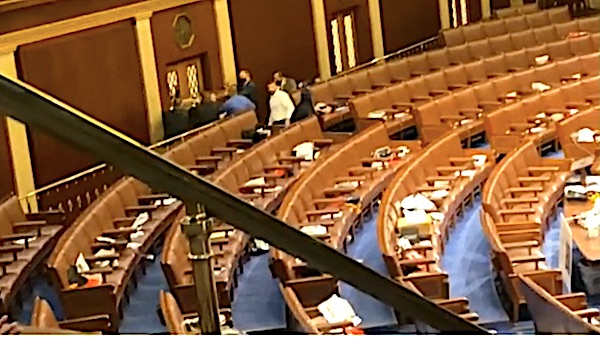 Leftists in Congress are working hard, perhaps without realizing the implications, on a plan that would allow the Jan. 6 prisoners to sue the federal government.

A report in Just the News explains Democrats Hank Johnson of Georgia and Jamie Raskin of Maryland have proposed the Bivens Act, “which would allow citizens to recover damages for constitutional violations committed against them by federal law enforcement officials.”

The bill would change federal law which already allows lawsuits against state and local officials to add federal officials as possible defendants in lawsuits over violations of civil and constitutional rights.

The FBI, Justice Department, Transportation Security Administration, U.S. Immigration and Customs Enforcement, and federal prison officials all are included in the list of law-enforcement entities that would be held accountable under the legislation.

Democratic Sen. Sheldon Whitehouse of Rhode Island already is working on a companion plan in the Senate.

Johnson claims the change is needed because of President Donald Trump, stating, “Victims of constitutional violations by federal officers too often have no legal recourse. From ICE officers who conduct illegal searches and seizures and Bureau of Land Management officials who intimidate property owners into providing easements to the peaceful protesters who were violently dispersed from Lafayette Square with teargas and rubber bullets last summer so [President] Trump could get his Bible photo op — they are all too often immunized from damages for their constitutional wrongs.”

Actually, the Department of the Interior’s inspector general found that U.S. Park Police removed protesters from the Lafayette Square location “to safely install the anti-scale fencing insrsepo0nse to destruction of property and injury to officers” that leftists had inflicted there.

“Many of those injured that day, including several of my constituents, may find themselves without an effective legal remedy. This bill will right that wrong by allowing affected citizens to recover damages and hold federal law enforcement officials accountable for misconduct.”

The report noted, however, the legislation also “would incidentally offer a path to civil remedy for those imprisoned without trial for alleged involvement in the Jan. 6 Capitol breach who say they’ve been mistreated by federal authorities to sue.”

Multiple prisoners have charged that the FBI, Department of Justice and federal prison officials in the Biden administration have blatantly violated their constitutional rights.

The report cited the case of Thomas Caldwell, 66, who charges he was arrested at his Virginia farm in January and interrogated for hours without being told what he was being charged with.

He never even entered the U.S. Capitol on Jan. 6 but ended up behind bars – in solitary – for more than a month.

Another defendant was jailed for months “on charges related to the death of Capitol Police Officer Brian Sicknick,” despite a ruling from the medical examiner that Sicknick died of natural causes.

The report said other leftists in Congress supporting the plan include Democrats Ted Lieu of California, Andre Carson of Indiana, Rashida Tlaib of Michigan, Sheila Jackson Lee of Texas and Alexandria Ocasio-Cortez of New York.

The report explained that the Democrats also are lining up to give Republicans exactly what they want.

“The problem with the current lack of recourse for citizens whose constitutional rights are violated by government officials is that there is no legal recourse for them — meaning innocent victims exclusively bear the brunt of errors that should be borne by taxpayers,” said Harmeet Dhillon, the CEO of the Center for American Liberty and chair of the Republican National Lawyers Association.

“The principle that those who cause harm should be held accountable is something that all Americans should be able to get behind,” he said.