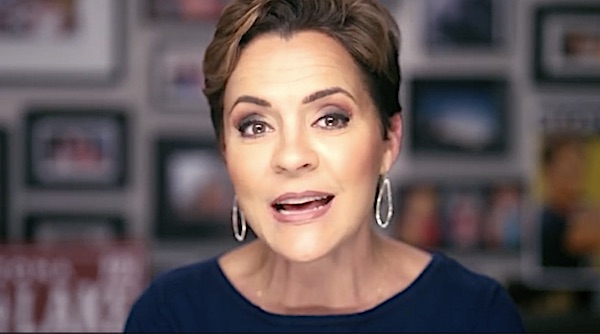 A candidate for governor in Arizona says if elected she’d send armed troops to the border.

Because of the “invasion” of illegal aliens that Joe Biden has allowed under his open borders policies, which is imposed in his attempt to reverse the successes President Trump had seen under his plans to lock down human smuggling operations and build a border wall.

Just the News reported Kari Lake, a Republican endorsed by Trump who is leading the race for Arizona governor, announced she would declare her state is under invasion and send in the troops.

She announced her plans in an interview with the Just the News TV show on Real America’s Voice.

Biden announced the cancelation of Trump’s security measures immediately when he took office. Since then, the crisis has deepened as hundreds of thousands of foreigners, attracted to America because of its economy, jobs, welfare and more, have arrived at the southern border.

That’s about to get worse, too, even Biden has admitted, as the Title 42 health regulation the Trump administration instituted during the COVID-19 pandemic is expected to go away.

“We already have a tsunami at our border with this invasion,” but that expected move will make it much worse, she told Just the news.

Lake suggested incumbent Gov. Doug Ducey hasn’t done enough and needs “to get troops down on the border.”

She said she would issue a declaration to protect state residents from “imminent danger.”

She said under that, she would unleash the state’s National Guard and let service members arrest and “send back” illegal aliens.

“It’s pretty simple. You protect your people. And that needs to be done. And right now our government’s failing on that,” she said during the interview.

Davis is poised to become a House committee chief if Republicans take back the House during the midterm elections in the fall. He applauded Trump’s response to the border crisis even though the former president did not endorse him in the upcoming primary.

“The Biden administration tried to gaslight the American people for months saying that we didn’t have a border crisis when those of us who have been to the border have witnessed it personally,” he said.

“We’ve got to have a president who’s willing to stand up and protect our border [and] make sure that we reinstitute the remain in Mexico policy that was instituted under President Trump,” he said.