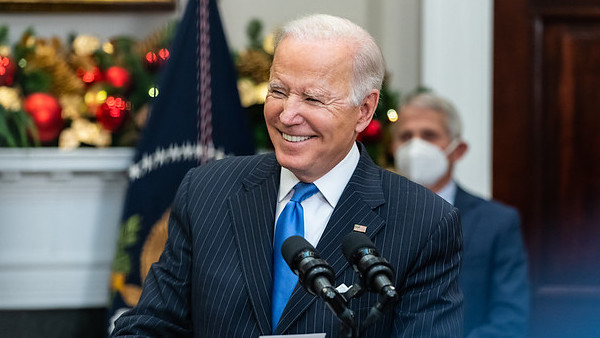 The federal agency that uses just short of $1 billion a year of Americans’ tax money to broadcast the nation’s message around the globe has failed to address security problems “for at least a decade” – leaving U.S. national security endangered, according to a report from the CEO who was fired by Joe Biden as soon as the Democrat moved into the White House.

The shocking information comes from a review of documentation by Just the News, which confirmed Biden also then “quickly rehired senior officials” for the U.S. Agency for Global Media who previously had been fired after a recommendation from an outside law firm reviewing security problems.

For instance, the agency used for its program of hiring foreign nationals as journalists the same visas intended for au pairs, and 1,500 of the agency’s 4,000 employees reportedly had security issues such as incorrect background checks, the report said.

The details come from a report issued by former CEO Michael Pack, who completed his review and submitted a formal request to the State Department’s Office of Inspector General for a full investigation just days before Biden fired him.

Pack had requested a full investigation of the organization’s security and financial issues, among others.

According to Just the News, Pack’s report confirmed he had learned that former senior managers “had repeatedly failed to adhere to national security protocols and essential federal government personnel security practices for at least a decade.”

His report continued, “The actions – and, in many cases, inactions – of the individuals responsible for producing this crisis placed U.S. national security in danger and imperiled USAGM’s ability to fulfill its legal mandate of advancing U.S. foreign policy.”

But Biden’s strategy was to dismiss Pack, and his concerns about security, and rehire those managers who had been dismissed after an investigation into security issues by the legal team at McGuireWoods, Just the News reported.

The publication said it reviewed the official summaries of the law firm’s investigation after they were submitted by Rep. Scott Perry, R-Pa., to the Congressional Record along with Pack’s Jan. 14, 2021, letter.

Perry explained to the Just the News Not Noise podcast that he obtained the materials legally even though the agency had refused to release them – after which USAGM’s current officials boasted to him “You don’t have all of it.”

Perry said U.S. taxpayers pay for the operations, which he described “corruption at the highest level.”

Pack’s dismissal of the former and now current administrators was based on “repeated warnings from federal intelligence and personal offices,” the report said, which prompted Pack to reach out to State Deputy Inspector General Diana Shaw.

Among the issues cited by Just the News: Several individuals that U.S. intel agencies were “watching” because of the “real risk.” Another situation involved a senior official turning money intended for internet firewall circumvention in repressive countries into a “slush” fund under her control.

Other issues: One of the rehired officials was found to have “wiped” agency electronics when he was put on leave, several instances of officials sending “potentially sensitive” documents to their personal email accounts, and more.

Some of the same concerns had been raised in a 2020 report by the Office of Personnel Management, which had been cited in an op-ed by American Foreign Policy Council Senior Fellow James Robbins shortly after the presidential election.

That pointed out that those employees with “deficient security clearances” from USAGM could get access to “closed meetings or private discussions of classified material in executive agencies or on Capitol Hill,” Just the News confirmed.

He wrote that those “serious problems” revealed by OPM and the Office of the Director of National Intelligence “long predated both the Trump administration and the confirmation of Michael Pack.”

The organization previously was called the Broadcasting Board of Governors and is home of the Voice of America. It funds Radio Free Asia and other such programs.

Its budget is about $850 million annually.

Just the News explained Pack believes the “opposition” to his leadership came because he was trying to restore “fair and balanced” reporting of the news, and Perry confirmed Pack uncovered “a bunch of snakes under rocks.”

“Dozens had been granted ‘confidential level or above’ security clearances ‘despite having invalid background investigations, adjudicative actions, and government access cards,’ he told Shaw. Pack still isn’t sure how many employees had secret and top-secret clearances,” Just the News revealed.