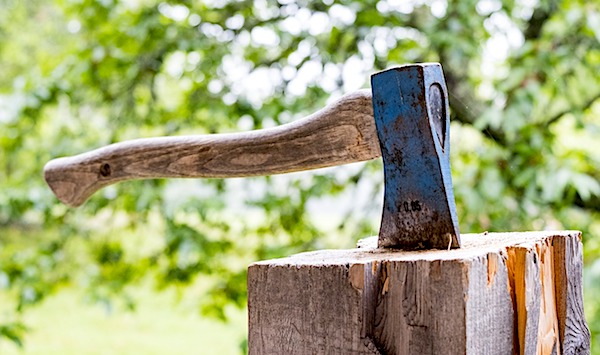 A report from PJMedia is explaining how a member of Antifa used an ax to vandalize a Republican senator’s office.

Then Democrats gave him money and the FBI returned the ax.

It was last December that he smashed an intercom and glass door at the office of Sen. John Hoeven in Fargo.

The report explained, “Federal guidelines suggested Starks should spend 10–16 months in the hoosegow, but because he is a protected member of Antifa, he was sentenced to mere probation and ordered to pay $2,784 in restitution.

“Keep in mind that there are people still in solitary confinement for taking non-violent selfies in the Capitol on January 6,” the report said.

Then it reported that the FBI returned the ax he used, and Starks bragged about it on the company formerly called Facebook, now Meta.

With an image of the ax, he wrote, “Look what the FBI were kind enough to give back to me!”

He also boasts that “I am ANTIFA. I will always attack fascists, racial superiority complexes built around nationalism that promotes genocide to fuel a war machine is the worst humanity has to offer.”

After being charged, he went online to explain he wanted money to hire a lawyer, in fact, a “quality defender,” as the report explained .

The North Dakota GOP had another view: “It is inexcusable that Chairwoman Oversen would be personally involved in supporting a far-left extremist whose violent actions constitute an assault on our democracy.”

While Leftists Call For Violence Against SCOTUS, The Babylon Bee Remains Locked Out Of Twitter