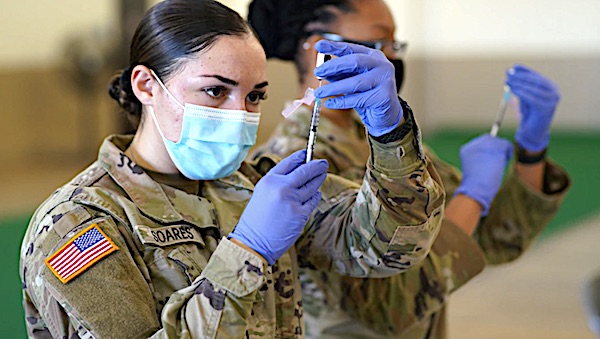 A mother in Utah is warning parents about the possible dangers of COVID-19 vaccines after her 17-year-old, basketball-playing son got a shot and developed three blood clots in and near his brain.

The report comes from the ABC News affiliate in Salt Lake City.

The mother is Cherie Romney of Draper, Utah.

“The hardest thing was I let him get that shot. And he was healthy and well before,” she told the station. “But you question it, you can’t help but question it when it all goes wrong.”

The report said that playing basketball could have aggravated the swelling caused by the vaccine.

Everest Romney, 17, felt his neck swell the day after his COVID-19 Pfizer vaccine shot and he then experienced severe headaches, the report said.

A doctor dismissed the symptoms as a pulled muscle, but Cherie Romney was convinced there was something more.

“He could not move his neck without the assistance of his hands,” she said.

She eventually took her son, a Corner Canyon High School basketball player, for tests. Doctors discovered two blood clots inside his brain and one on the outside.

He was treated for a time in the intensive care unit and remains hospitalized.

Cherie Romney said she wants parents to make the best decisions for their children and doctors to understand the new vaccines might bring challenges to the conventional wisdom, according to the report.

She said that with what she now knows, she would have made a different decision.

“It was pretty awful,” she said.