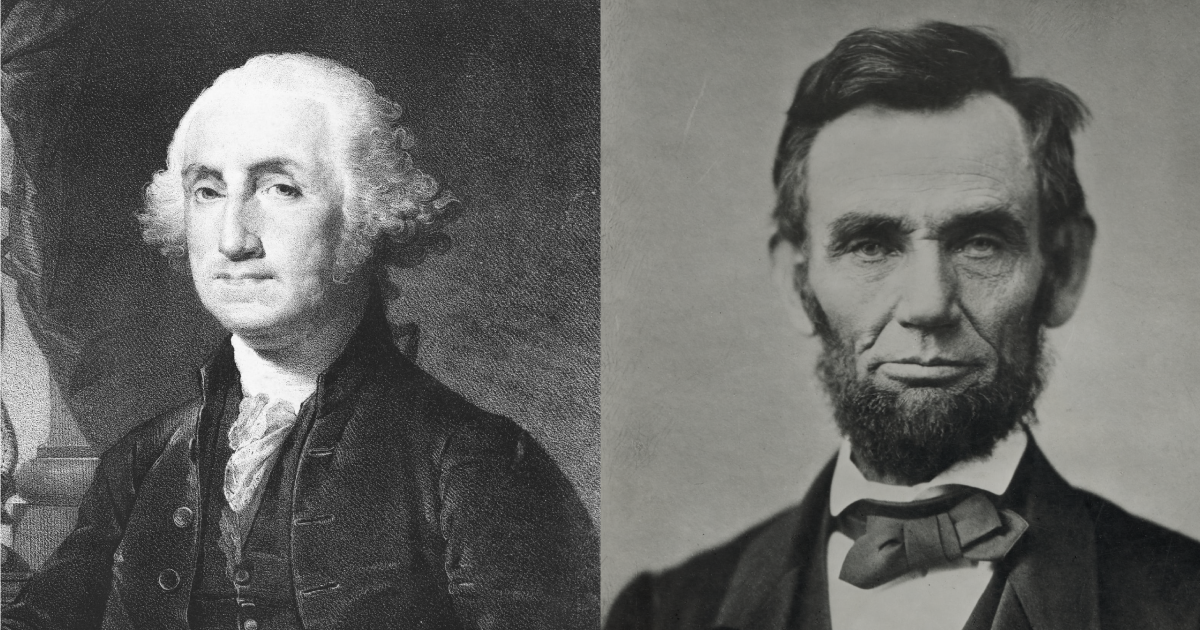 Many years ago, schools in my home state of California used to celebrate two of our greatest President’s birthdays, Feb. 12 for Abraham Lincoln and February 22 for George Washington as holidays. Children would learn stories about how a poor boy who grew up in a log cabin became the President who held our nation together against all odds, and about a surveyor, soldier, planter who risked everything to bring our great nation into being.

Kids would make stovepipe hats and beards for Abe and axes for George, as a symbol of the story about how he confessed to cutting down a cherry tree by saying, “I cannot tell a lie.”  Whether the latter story was true or not, it imbued children with a sense of honor about how they should behave and about the type of men who fought the greatest power on earth for their freedom.

However, the curriculum of the time had moved away from memorizing great writings and speeches in history rationalizing that people can always look them up. And unfortunately, President’s Day has morphed into little more than an excuse to take a Monday off and go buy a mattress or some other discounted items.

It is valuable to have children spend extended focused time learning progressively more about the man who held the revolutionary army together through the frozen winter of 1777, later choosing to step down from the presidency because he didn’t want to be king, and the man who fulfilled the constitutional promise of freeing the slaves. In many respects it is through their leadership, courage and foresight that America was forged.

Instead, our post-modern youth view the Father of our Country as little more than a self-interested slaveholder and Lincoln as someone who somehow fell short, in spite of being assassinated shortly after forcing the 13th amendment to the Constitution outlawing slavery through Congress.

And our nation groans under the ignorance of our youth as they demand to cover murals of Washington and tear down statues of Lincoln repudiating the history that gave them both their affluence and the right to dissent.

But there is something that each of us can do.  Rather than cede the stories of our two greatest presidents to malevolent curriculum writers, we can share the truth about our founding with our children and grandchildren on this and every other day.

We can demand that our local schools return to requiring the memorizing and reciting of three great foundations of our nation: the opening two paragraphs of the Declaration of Independence, the Preamble to the U.S. Constitution and the Gettysburg Address.

While words reflecting the aspirations for freedom ring throughout our history, these three simple summaries of why our nation is the greatest on earth will help restore the foundation that our youth have been deliberately denied by those who manipulate them into self-loathing hatred of their greatest privilege, being an American.

As you think about what this nation means, which is more than any one person, remember that we are, “created equal endowed by the Creator with certain inalienable rights among these are life, liberty and the pursuit of happiness….”

That our nation government is based upon the principles that, “We the People of the United States, in Order to form a more perfect Union, establish Justice, insure domestic Tranquility, provide for the common defence, promote the general Welfare, and secure the Blessings of Liberty to ourselves and our Posterity, do ordain and establish this Constitution for the United States of America.”

And in perhaps the greatest speech, this side of the Sermon on the Mount, Abraham Lincoln defined the Civil War fields of Gettysburg, Pennsylvania which just five months prior were saturated in blood, saying,

“Four score and seven years ago our fathers brought forth on this continent a new nation, conceived in Liberty, and dedicated to the proposition that all men are created equal.

“Now we are engaged in a great civil war, testing whether that nation or any nation so conceived and so dedicated, can long endure. We are met on a great battle-field of that war. We have come to dedicate a portion of that field, as a final resting place for those who here gave their lives that that nation might live. It is altogether fitting and proper that we should do this.

“But, in a larger sense, we can not dedicate—we can not consecrate—we can not hallow—this ground. The brave men, living and dead, who struggled here, have consecrated it, far above our poor power to add or detract. The world will little note, nor long remember what we say here, but it can never forget what they did here. It is for us the living, rather, to be dedicated here to the unfinished work which they who fought here have thus far so nobly advanced. It is rather for us to be here dedicated to the great task remaining before us—that from these honored dead we take increased devotion to that cause for which they gave the last full measure of devotion—that we here highly resolve that these dead shall not have died in vain—that this nation, under God, shall have a new birth of freedom—and that government of the people, by the people, for the people, shall not perish from the earth.”

Imagine the changes for the better if each of our children and young adults had these three simple complementary definitions of the American experiment in individual liberty running as the background music in their minds as they look to the future.

In the fight for our nation, I can think of no better place to start than making certain those who despise liberty aren’t allowed to define it for our children, and every parent, grandparent and great grandparent can take care that your children have some protection by their knowledge of the truth.

This post, President’s Day – Don’t Let Others Define America for Your Children, was originally published on The Daily Torch and is republished here with permission. Please support their efforts.