Praying to God could be made a crime, lawmakers threatened with legal action 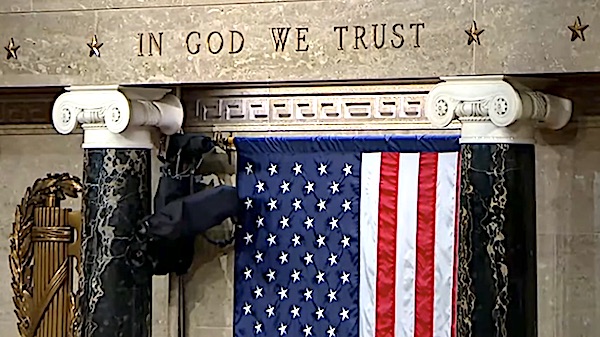 The Christian Institute in the United Kingdom revealed this week it will take legal action if lawmakers go ahead with a strategy to ban “conversation therapy” that would impact churches’ missions, ministries, and even praying to God.

Jason Coppel, QC, wrote in a detailed legal opinion for the faith organization that activists who are proposing new definitions in law to address their fears of “conversion therapy” would criminalize the ordinary work of churches.

Activists claim so-called “conversion therapy” is an orchestrated strategy to persuade homosexual individuals to leave that lifestyle choice and become straight. But often it’s counseling that is in response to an individual’s own desire to rid themselves of unwanted same-sex attractions.

Coppel warned that prayer, evangelism, church membership, baptism and communion could all breach a broad conversion-therapy law like the one recently passed in Victoria, Australia.

Churches that follow the Bible’s teaching on gender and sexuality were targeted recently in a debate in the British Parliament over legislation that would ban so-called “conversion therapy.”

Member of Parliament Alicia Kearns dismissed concerns over the impact of such a ban on freedom of religious expression, according to the U.K.’s Christian Institute.

“Religious liberty is fundamental, but so too is people’s liberty to live their lives free from identity-based violence and abuse,” she told her colleagues.

Kearns insisted that any prayer “inconsistent with LGBT theology” should be banned.

Supporters of counseling for people with unwanted sexual attractions reject the term “conversion therapy,” describing it as an ideological term used by the LGBT activists who seek to link compassionate spiritual care and talk therapy with disreputable practices.

The Westminster Hall debate focused on a petition to make it a criminal offense to practice conversion therapy in the U.K. or send people abroad for it.

Several MPs branded prayer and pastoral support as “conversion therapy,” which was also described as “torture.”

Kearns defined “conversion therapy” as any attempt to stop someone from expressing their chosen gender identity or sexual orientation.

She said a ban must include “not only conversion therapy to change sexual orientation” but also “non-consensual attempts to prevent someone from expressing their own identity.”

But Coppel said in his analysis that such legislation would violate existing U.K. human rights laws that protect “the freedom of church organizations to preach” their beliefs on sexual ethics and gender identity.

Further, he said, a demand that “parents to affirm a child’s desire to ‘change sex’ would also endanger parents’ ability to bring up their children in accordance with their beliefs.”

Such beliefs, he wrote, “are not eccentric or peripheral matters of belief. They have a long history within Christian theology and sexual ethics.”

Courts, he said, have “consistently regarded such beliefs as protected by Article 9 ECHR and worthy of respect.”

The legal requirement, he said, is that the government treat those beliefs with “neutrality and impartiality.”

The Christian Institute’s Deputy Director for Public Affairs Simon Calvert, said: “A ban on spiritual guidance and prayer would be tyrannical and unworkable. Do they expect police, prosecutors and courts to decide which kinds of prayer are criminal and which are not?”

He said, “Most people would be horrified by the prospect of someone being convicted for praying ‘the wrong kind of prayer.’ We must not allow activists to exploit legitimate concerns as a cover for pursuing anti-religious agendas.”

A court case would follow immediately of the government “caves into demands to widen the ban to include the ordinary, everyday activities of churches,” he said.

Lawmakers specifically said parents should face charges if they help their children with such therapy.

Parliamentarian Elliot Colburn claimed conversion therapy can be anything “from pseudo-psychological treatments and aversion therapies to practices that are religiously based, such as purification or fasting.”

And MP Angela Eagle condemned “being told by faith leaders or your family that you are sinful.”

“Being told to pray harder to change and to question your innermost feelings and thoughts … none of that should be legal,” she said.

LGBT activists have been working on their agenda to criminalize the work of Christians and Christian churches for years.

Josiah Hesse, a writer for the London Guardian newspaper, in 2018 charged that prayer had become “conversion therapy.”

The reaction was prompted by a video of Emily Thomes’ testimony released by Anchored North, an evangelical media company.

The group releases BuzzFeed-style videos, and this one is titled “Love is Love.”

While packaged similar to pro-LGBT marketing campaigns, Thomes’ message is that a person can be freed from same-sex attractions through the power of Jesus Christ.

“It’s not gay to straight, it’s lost to saved,” she explains.

The concept of conversion therapy presumes there is an underlying cause for same-sex attractions that can be addressed. Such counseling has been banned for youth in several U.S. states, but those restrictions on the First Amendment’s freedom of speech and freedom of religion still are being challenged.