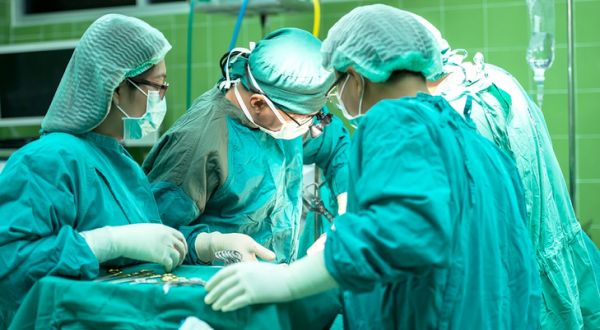 A prominent organization of top physicians and surgeons in America has launched a campaign for Americans to lobby Congress to ban discrimination against transplant patients who do not take the experimental COVID-19 shots.

Those discriminatory procedures already have undoubtedly had an impact on multiple lives, as hospital corporations have denied patients with pending transplants permission to move forward.

In one case, permission was denied even though the transplant patient had a donor lined up.

It is the American Association of Physicians and Surgeons that is offering an online process to allow Americans to email their members of Congress.

From Rep. Ben Cline, R-Va., it is in response to “several reports from across the United States of individuals being removed from the organ transplant list or moved to ‘inactive’ status as a result of being unvaccinated.”

“It is unimaginable that organ transplant centers would deny American citizens life-saving medical procedures solely for being unvaccinated against COVID-19. The SAVE Act ensures that no one is denied an organ transplant or donation based on their vaccination status. Getting vaccinated is a personal choice and should not be mandated. This legislation is not anti-vaccine, it’s about making sure individuals get the treatment they need,” Cline said.

Dr. Jane Orient, executive director of the Association of American Physicians and Surgeons said, “The need for the SAVE Act shows that in the U.S. patients have no right to the medical care they need or desire but only a privilege to receive what the authorities will allow.”

WND previously has reported on the scary trend that has developed.

A recent incident happened in Massachusetts. There, according to Lifenews.com, a Boston hospital removed a dying man’s name from a heart transplant list because of his vaccination status.

The situation involves D.J. Ferguson, 31, whose heart has deteriorated to the point it not longer works on its own.

His father, David Ferguson, explained in the report that D.J. was first in line to get a heart transplant in Boston, “but because of his unvaccinated status, the hospital ruled that he was no longer eligible for the transplant.”

This decision came despite the confirmation of thousands of deaths from the side effects and complications from the COVID shots, as well as revelations from federal authorities that some patients are better off and less likely to get some of the COVID variations if they are not vaccinated.

Explained David Ferguson, “My son has gone to the edge of death to stick to his guns and he’s been pushed to the limit. It’s kind of against his basic principles, he doesn’t believe in it. It’s a policy they are enforcing and so because he won’t get the shot, they took him off the list of a heart transplant.”

Brigham and Women’s Hospital defended its decision, explaining that the COVID shots, which remain in the experimental classification, are among “several vaccines and lifestyle behaviors required for transplant candidates in the Mass General Brigham system in order to create both the best chance for a successful operation and also the patient’s survival after transplantation.”

Already, the report said, Australia has confirmed it is discriminating against unvaccinated patients in the process of allowing transplants, and the University of Colorado Health system has refused permission for unvaccinated transplant candidates to be part of the process.

Columnist Michele Malkin also has written about the discriminatory practices.

She points out that federal law allows illegal aliens to be given emergency room care, regardless of their status.

“According to estimates from 2019 cited in a recent study published by the American Journal of Kidney Disease, there are between 5,500 and nearly 9,000 illegals with kidney failure in the U.S. There’s now a COVID-era push to provide them not only with emergency-room dialysis (at an estimated cost of $400,000 per illegal alien per year) but also with outpatient dialysis under Medicaid. Conveniently, the United Network for Organ Sharing and Organ Procurement and Transplantation Network do not document immigration status, so there are no reliable estimates of exactly how many illegal aliens have received organ transplants in the U.S. At least one scientific journal article identified 400 illegal aliens who had received kidney transplants since 2005 – most in California at taxpayer expense,” she explained.

With that as background, she wrote about Leilani Lutali, an American citizen with stage 4 kidney disease who has been denied potential treatments, including a transplant, because of her donor’s unvaccinated status.

Lutali had made a connection with Jaimee Fougner to go ahead with a transplant but hospital officials now are denying Lutali a possibly life-saving treatment because of the status of Fougner, the donor.

She continued, “Leilani has now been placed on the ‘inactive’ list – a death sentence.”

She wrote, “I reached out to UCHealth, whose communications vice president Dan Weaver confirmed in a statement to me that, ‘In almost all situations, transplant recipients and living donors at UCHealth are now required to be vaccinated against COVID-19 in addition to meeting other health requirements and receiving additional vaccinations.’”

Malkin warned, “Yes, my fellow citizens, we have now arrived at the insane point in America where unlawful immigration status provides more protection than unvaccinated status – and where health care is a taxpayer-subsidized right for indigent illegal aliens, but not faithful, pro-life Christians who stand up against medical tyranny.”

DeSantis Is History’s Greatest Monster For Some Reason