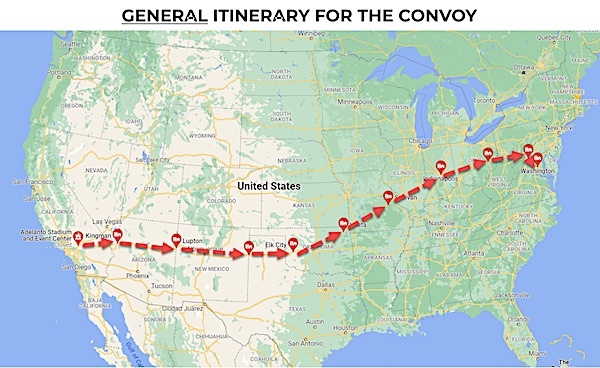 I was really worried for the People’s Convoy.

I had a dream, a nightmare, that a righteous cause would be subverted, undermined, made to look foolish by forces of the Swamp as the breathtaking truckers caravan arrived in the D.C. area last weekend.

It would have been easy – if they were not ALL of the right heart.

The truckers were suppressed, beyond question. The media ignored them, even – dare I say it – Fox News. The fake news didn’t know what to do with them. Some of them lied about the convoy. They excoriated the truckers as dangerous zealots, skinheads, Nazis and malcontents – just like they had done with the Canadian version.

But the media had a surprise coming. You can demean people all day, but good people rise to the occasion. And these were good-hearted people – salt-of-earth human beings who were fed up with the federal government, like all of us. And this was their moment – passing through the D.C. Beltway and doing an end run against the District of Criminals.

Cleverly bypassing Washington, the destination was Hagerstown Speedway in Maryland. They avoided the fences, the shock troops, the feds, Joe Biden’s illegitimate government, the regime or whatever you want to call them. On Sunday, it was just beautiful, spectacular, a triumphant ending to a long nationwide protest of perfection. Let March 6 supersede Jan. 6. We’re getting too smart for another “insurrection.”

It was gigantic display for freedom, with American flags everywhere you turned. And it was another day for the good guys, the working people, the MAGA crowd, the CANCELED crowd to make themselves heard – just as our neighbors to the north did until Justin Trudeau show his colors as a tyrant.

These patriots were protesting the same actions that have been taking place all over the once-free world – mask mandates, vaccine terrorism and one embarrassment after another for America.

“People are tired, they are fed up” with their freedoms being chipped away, said Kris Young, who was livestreaming the event on Facebook from the truck her husband drove. “Our kids and our grandkids are not going to be living in the same country that many of us grew up in.”

She called the event “very fluid,” as the truckers decided against clogging the streets of Washington, D.C.

“We can’t just go in there like a bull in a china shop and lock down D.C. and be infiltrated,” she said. “There is no long-term plans made. We never knew how big it was going to grow from one day to the next and we still don’t know that. … We want the emergency powers ended, which will do away with mask mandates. We want congressional hearings for accepting transparency.”

I played the “reluctant prophet” in my earlier column, “Who’s really in charge of America?” of Saturday. I was wrong, fainthearted, weak-minded. I did not believe in these people – there had to be wise guys, saboteurs in the pack, I thought. I attribute it to my early days growing up in New Jersey witnessing too much crime. I freely admit it.

I was still in a sad daze about the war in Ukraine. I was still stunned by Biden’s State of the Dis-Union address. I was still amazed at how the Demoncrats were still comparing the Jan. 6 kerfuffle to Pearl Harbor, the Civil War and 9/11.

God bless America! The good guys won this round.