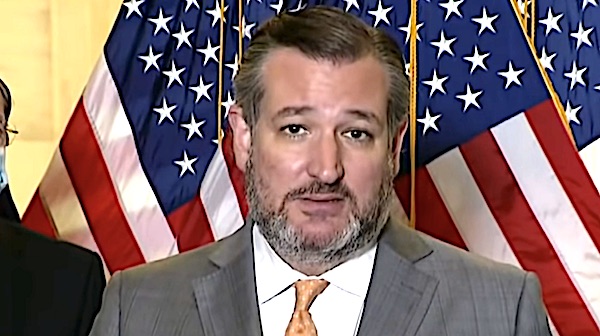 The fight over court-packing, a scheme pursued by Democrats to add four seats to the Supreme Court while they are in power, is getting heated.

The Huffington Post claimed Friday in a now-deleted tweet that Sen. Ted Cruz “may have told his biggest lie yet with the claim that Republicans never engaged in court packing when they controlled the White House and Congress,” Fox News reported.

But Cruz was right.  The previous effort to pack the court, before the current campaign by Democrats, was by a Democratic president back in the 1930s.

Cruz was speaking at a news conference in which Senate Republicans criticized the Democratic plan to expand the court from nine judges to 13, giving liberal justices a 7-6 majority with President Biden and Democrats in control of the White House and Senate.

“We didn’t do this,” he said. “We could have. … You didn’t see Republicans when we had control of the Senate try to rig the game. You didn’t see us try to pack the court.”

The Huffington Post claimed the GOP loves “ramming judges through the system, including at least 174 district court judges and 54 appeals court judges.” And it correctly noted the Trump administration nominated three to the Supreme Court.

However, Fox News noted, “At no point did HuffPost show Republicans had done anything but fill vacancies, which does not fit the definition of ‘court-packing.’”

A spokesman for Cruz suggested the Huffington Post’s accusation was yet another attempt by the left to redefine terms.

Democratic leaders similarly have misused the term, with Sen. Dick Durbin, D-Ill., recently stating, “The American people have watched the Republicans packing the court for the past three and a half years.”

The RedState blog reported a Georgetown law student badgered Cruz at the end of the news conference.

Law Student Calls Out @SenTedCruz and GOP Hypocrisy to His Face pic.twitter.com/w6JjdWvvPq

The student accused Cruz of “hypocrisy” on court-packing.

“Why? Because in the student’s mind (and because clearly he’d been taught by his law professor to believe this, as you’ll soon see), Republicans not allowing Obama nominee Merrick Garland an up or down vote and then later adding a Trump-nominated judge (Neil Gorsuch) to the Supreme Court instead was the same thing as ‘court-packing,’” RedState said.

“What’s awesome about the video is that Cruz, a Harvard law grad, barely breaks a sweat in countering every ‘point’ this guy tried to make.”