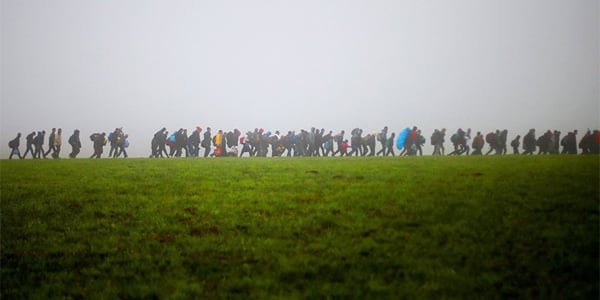 As those who pay attention to the news know back in the day it was global warming. Then it was global cooling – and horrified predictions for a new ice age.

Then it was global warming again, only it wasn’t warming so it was changed to climate change, apparently meaning something more threatening than the fact that July is Dallas is warmer than Minneapolis in December.

Now the agenda that lionizes the temperature of the air outside is being superimposed on that of aliens illegally crossing national borders.

Apparently they are now “climate migrants.”

A report from the RAIR Foundation said the World Economic Forum and “journalists” like Gaia Vince are part of a “larger political campaign to build government and business support for flooding the United States and Europe with so-called ‘climate migrants.’”

The report explained that globalists have been attempting for years to use the weather to push an agenda of population control and replacement, or even “depopulation.”

“But, as the United States and European countries grow tired of welcoming illegal migrants who are often dangerous people with values and ambitions that oppose Western values and laws, Globalists are trying to rebrand them as ‘Climate Migrants’ to gain them entry,” the report explained.

Vince appeared recently on Sky News with the message that millions of people must flee the rising seas and mega-hurricanes of “climate change,” which so far is found mostly in predictions, as Barack Obama bought a mega-million dollar mansion right on the seacoast, apparently without the expectation that it would be under water in a few years.

“Mass migration is not a negative consequence of the so-called ‘climate crisis’ but a solution that needs to be seized and planned for, argues Vince,” RAIR reported.

“Large-scale people movements have the potential to address many societal problems, she falsely claims, and pave the way towards a fairer, safer, and more prosperous world.”

In fact, the WEF claimed earlier this year that there would be 200 million “climate refugees” that must be brought to the West by 2050. Another prediction, from the World Bank, claimed “climate change” could cause 216 million to move within their countries.

The report said WEF, in fact, has demanded that westerners “open up their ‘homes, communities, and jobs’ to climate illegals.”

The RAIR reported noted that even the WEF admitted that “climate migrants” are just those people who are looking for better economic opportunities for themselves, and there are approved immigration procedures through which to pursue that goal.