No vaccine, no college? Physicians group urges students to fight back 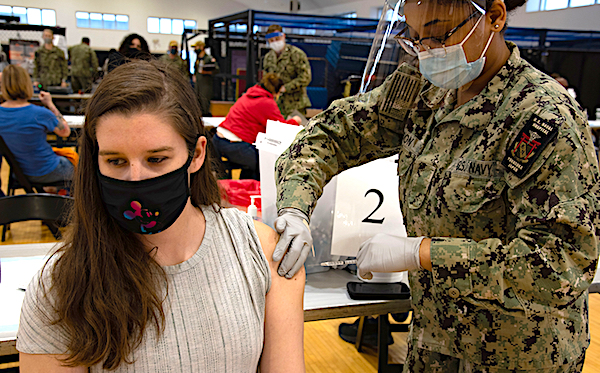 Many colleges and universities have announced they will require students planning to return to campus this fall to be fully vaccinated against COVID-19, explaining their aim is to “protect the health and safety of the community.”

And the American College Health Association — which recommends the vaccination requirement — makes it clear that the main purpose is not to protect the students themselves. The protection is not for the young people, who have only a miniscule risk, but for the high-risk individuals in the surrounding community or wherever the students go in the “mass migration” at the end of the semester.

She points out that people 15 to 24 years of age amount to only 0.1% of recorded COVID deaths. And their survival rate is virtually 100%, according to the CDC.

Yet, Orient argued, young people can suffer death or serious disability after getting one of the experimental COVID-19 vaccines, which have not been fully approved by the FDA.

She pointed out that according to an independent analysis, the aggressive Israeli vaccination campaign killed more than 200 times as many young persons as the coronavirus itself could have killed during the same 35-week period.

An online commenter that backed the ACHA’s recommendation on its website made the case for young people accepting the risk.

“It is perfectly reasonable for a society to expect its members, *all* of its members, to take up such risks on behalf of everyone. Unless you plan on putting a bullet in your own head on your thirty ninth birthday, one day *you* will be that elderly person who benefits disproportionately from universal vaccination. To not accept that risk now, yet expect that protection later, would make you a hypocrite.”

Orient reacted: “So much for the parental instinct to protect children—instead of using or sacrificing them!”

She acknowledged that the precise number of post-vaccine “adverse events” because of incomplete reporting.

But on the U.S. Vaccine Adverse Events Reporting System (VAERS) and the British Yellow Card system are reports of death, clotting or bleeding problems, paralysis, blindness and miscarriages.

“The long-term adverse events cannot yet be known. The prospect of most concern to the young women calling our office is infertility,” Orient said.

“There are plausible reasons to worry,” she said. “Viral spike protein has been found in placentas from mothers who gave birth after having COVID. And the spike protein itself, without any virus, can attach to the lining of blood vessels and many tissues, and even cross theblood-brain barrier, and wreak havoc.”

She noted that the Pfizer experimental trial excluded women who were or might soon become pregnant and required men to abstain or use a condom for 28 days post injection.

That sounds, she said, like an “abundance of caution.”

But there is no abundance of caution shown by ACHA and the institutions “in forcing this product onto students entering their prime reproductive years.”

No concern about “reproductive rights,” she said.

Orient argues it’s illegal to use coercion to gain acceptance of products that are available only through an emergency use authorization.

The colleges and universities, she said, apparently are confident of quick FDA approval, even though trials won’t be complete until 2022 or 2023.

What can students do?

Orient said her organization, the AAPS, has written to college administrators urging them to withdraw the mandate but has received no reply.

She’s not optimistic that she will get a positive response, noting ACHA receives grants from Pfizer and that CDC that “probably talk louder.”

“So, what can students do?” she asks. “Be cheerful or reluctant participants in a massive uncontrolled experiment and hope for the best? Seek an exemption? Or pause their education plans and outrageous tuition?”

It all boils down to a risk-benefit analysis.

“The biological window for having a family will close,” she says. “How much risk of infertility should young people take?”

There’s another approach to the increasing trend of restricting access to the vaccinated.

Israel’s Health Ministry announced in Februrary it would allow people who are tested and found to have coronavirus antibodies to access sites open to the vaccinated and those who recovered from COVID-19.

Getting the “Green Pass” would require paying for the serological testing.