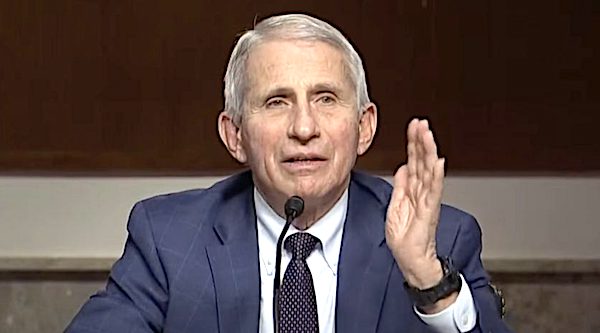 Under the leadership of Dr. Francis Collins and Dr. Anthony Fauci, the National Institutes of Health complied with the wishes of researchers at the Wuhan Institute of Virology in China and deleted information about the genetic sequencing of the virus that causes COVID-19, according to emails obtained by a nonpartisan whistleblower and government oversight group.

That compliance created consternation among scientists, the emails showed, reported Just the News.

The emails, obtained by a group called Empower Oversight through a Freedom of Information Act lawsuit, show a Wuhan University researcher submitted virus sequence information to the NIH’s Sequence Read Archive then asked that it be deleted.

The documents also show an expert advised Collins and Fauci that Chinese data could undermine Beijing’s claim that the pandemic did not originate in the Wuhan lab but had a natural origin.

Fauci, in an interview with the BBC this week, was asked how he “could be so certain, so early on” that the pandemic had a natural origin, when he “knew so little about the virus.”

“Well, I was never certain so early on,” Fauci replied. “I have always kept an open mind. But when you look at the circumstances of the evolution, the similarity between [SARS-CoV-2] and SARS-CoV-1 from 2002 and 2003, I said – as did many other virologists who are very experienced in that – that the most likely edeology was a jumping species from an animal to the human.

The BBC presenter then brought up the now-retracted letter published in The Lancet in February 2020 by Fauci-funded EcoHealth Alliance founder Peter Daszak ridiculing anyone who posits the lab leak theory as a conspiracy theorist.

“Was the scientific community too quick to dismiss the possibility that it could have come from a laboratory?” she asked.

“Well, I don’t think they were dismissing it,” Fauci said. “I think it’s been misinterpreted. Everyone has always kept an open mind.”

That was hardly the tone of Daszak’s highly influential letter, which while shutting down debate over the origin of the pandemic, failed to mention Daszak’s clear conflict of interest. Daszak was funded by Fauci to work at the Wuhan lab with the famed “bat lady,” Shi Zhengli, on the engineering of bat coronaviruses.

Daszak and 26 other scientists stated the letter: “We stand together to strongly condemn conspiracy theories suggesting that COVID-19 does not have a natural origin.”

Two months after the letter was published, Daszak emailed Fauci to thank him for “publicly standing up and stating that the scientific evidence supports a natural origin for COVID-19 from a bat-to-human spillover, not a lab release from the Wuhan Institute of Virology.”

“From my perspective, your comments are brave, and coming from your trusted voice, will help dispel the myths being spun around the virus’s origins,” Daszak wrote to Fauci on April 18, 2020.

The virologists who signed the letter in The Lancet then published a March 17, 2020, article in the journal Nature Medicine that stated, “Our analyses clearly show that SARS-CoV-2 is not a laboratory construct or a purposefully manipulated virus.”

But last September, The Lancet published a letter from 16 scientists that essentially condemned the two letters, charging they had “a silencing effect on the wider scientific debate, including among science journalists.”

Further, a Jan. 31, 2020, email Fauci received from four top virologists shows there was strong evidence the virus was engineered in a lab. But after a teleconference the next day with Fauci to discuss the virologists’ conclusion, the lead virologist began dismissing the lab-leak possibility as among “crackpot theories” that “relate to this virus being somehow engineered with intent and that is demonstrably not the case.”

“Congress should press the NIH for answers on why it is stonewalling Senate inquiries and dragging its feet on basic transparency through FOIA.”