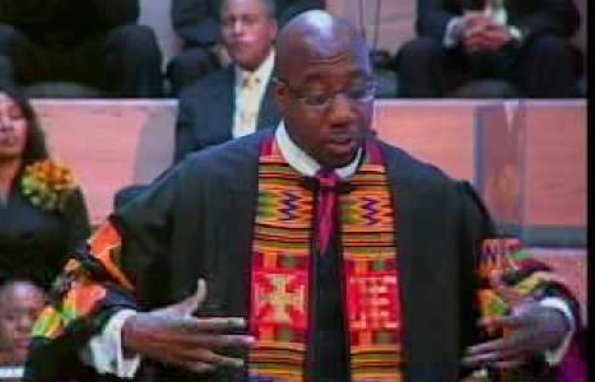 Ralph Warnock, the newly chosen senator from Georgia who will be facing voters again in less than two years, already is caught up in a scandal – over alleged voter registration misconduct.

Warnock was a narrow victor in a runoff race in January for one of two seats in the U.S. Senate from Georgia.

He boasted during his campaign of being a “pro-life pastor,” which prompted Hall of Fame football coach and Christian leader Tony Dungy to wonder openly whether Warnock was even a Christian, based on his advocacy for abortion.

“I would think it would be difficult for someone who believes that God sees us when we are in the womb (Psalm 139:13-16) to think that it is OK to choose not to bring that life to fruition,” Dungy said.

Rev Warner may be a pastor. My question would be “Is he a Christian?” That is, does he follow the teachings of Jesus and does he believe that the Bible is the absolute word of God? https://t.co/cabHEGB2XX

And the investigation of Warnock for activities involving the New Georgia Project isn’t even the first involving Warnock and that organization.

The Free Beacon reported weeks ago that the organization was “hit with thousands of dollars in tax liens for unpaid unemployment insurance” while Warnock was an official for the group.

The organization was cited for owning more than $7,800 to the Georgia Department of Labor.

Now Fox has reported that Warnock was head of the Project for three years, and the State Election Board has advanced a case against Warnock and the group based “on accusations they didn’t deliver voter registration applications on time in 2019.”

The board voted to refer the case to the state attorney general.

The Atlanta Journal Constitution said there were more than 1,200 voter registrations involved, and confirmed the referral to the AG could end up with a prosecution.

Warnock is named a respondent in the case as he was an official for the Project at the time.

State election rules demand that groups organizing voter registration drives provide those documents to the state within 10 days after they get them from the voter, but the Election Board, on a 3-0 vote, said it should be investigated whether the Project complied.

The Project, founded by failed Democratic candidate for governor Stacey Abrams in 2014, has had multiple run-ins with election officials.

Last year an investigation was announced into whether the Project tried to register “ineligible, out-of-state, or deceased” voters.

Dungy’s criticism of Warnock was direct. The first black NFL coach to win a Super Bowl and a legend in Indianapolis, where he never won fewer than 12 games a season during his tenure, except for his inaugural year when he won 10, said, “Rev Warner may be a pastor. My question would be ‘Is he a Christian?’ That is, does he follow the teachings of Jesus and does he believe that the Bible is the absolute word of God?”

On Twitter, Dungy pointed critics of his response to Warnock to the Bible.

“Please read Psalm 139:13-16. Then tell me if you think God puts babies in the womb or man does? If you believe they randomly get there, then I have no argument. But if you believe God puts them there, then how does anyone have a right to ‘choose’ which ones survive?”

Dungy won 148 games in 13 seasons as a coach. Known for his advocacy for strong fathers, he and his wife have 10 children, including seven who were adopted. He’s been active in many charities, including All Pro Dada, Fellowship of Christian Athletes, The Boys and Girls Club, Big Brothers and Big Sisters and the Prison Crusade Ministry. And he’s the author of “Quiet Strength,” “You Can Do It,” “Uncommon,” “The Mentor Leader,” “You Can Be a Friend” and “The Soul of a Team.”

Warnock, on the other hand, has a history of attacking Christians. Breitbart reported Warnock mocked Christians several years ago for advocating carrying guns for self-defense.

It came during discussion of a Georgia law allowing allowing people with concealed carry licenses to carry in places that previously were off-limits, such as churches.

Warnock, the Daily Caller News Foundation reported, also charged that it is the “moral bankruptcy of the American church” that put President Trump in office.