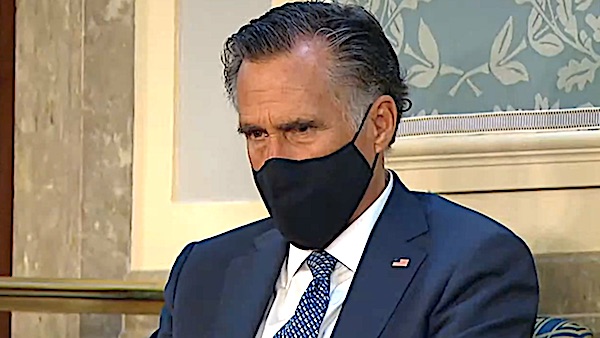 But one of the best known Republicans in the Senate, former GOP presidential nominee Mitt Romney of Utah, said Sunday he trusts Joe Biden.

Romney, in an interview with CNN’s “State of the Union,” was speaking after Biden retreated from a threat not to sign the $1.2 trillion bipartisan infrastructure deal if his American Families Plan was not part of the package.

Republicans oppose the $1.8 trillion American Families Plan, which Biden says “would make historic investments in education, health care child care, and tax cuts for families, coupled with other investments in care for our seniors, housing, and clean energy.”

Romney said he will “take the president at his word” that he will sign the infrastructure bill even if the American Families Plan doesn’t pass as a budget reconciliation measure.

“I don’t know exactly where everybody is after the weekend. I certainly can understand why, not only myself, but a lot of my colleagues were very concerned about what the president was saying on Friday,” Romney said.

“But I think the waters have been calmed by what he said on Saturday,” the senator added.

“I do trust the president.”

Biden tried to clarify his remarks Saturday, insisting he never meant to indicate he would veto the infrastructure plan.

He acknowledged that he “indicated that I would refuse to sign the infrastructure bill if it was sent to me without my Families Plan and other priorities, including clean energy.” the president said, Newsweek reported.

“That statement understandably upset some Republicans, who do not see the two plans as linked; they are hoping to defeat my Families Plan — and do not want their support for the infrastructure plan to be seen as aiding passage of the Families Plan,” he said.

“My comments also created the impression that I was issuing a veto threat on the very plan I had just agreed to, which was certainly not my intent.”

“There’s a lot of conversations taking place right now as to what the president meant,” Cassidy said Friday. “That was not the understanding as we began upon these good faith negotiations. So I’m hoping we continue in good faith and it won’t be as if we crafted something just to give the president a point of leverage to get something that Republicans disagree with.”

“If he’s gonna tie them together, he can forget it!” said Graham. “I’m not doing that. That’s extortion! I’m not going to do that. The Dems are being told you can’t get your bipartisan work product passed unless you sign on to what the left wants, and I’m not playing that game.”