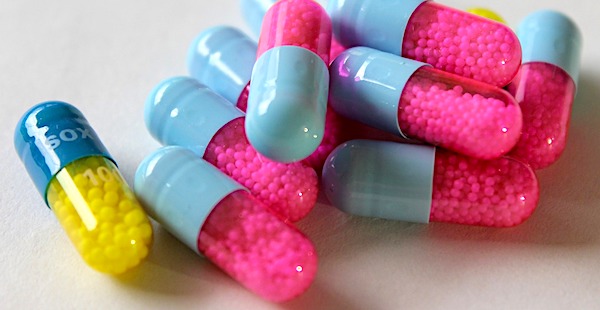 The announcement Friday by Merck that it plans to apply for emergency approval of a new experimental oral antiviral treatment for COVID-19 is of particular interest to many physicians who have been hindered or completely blocked from treating their COVID patients off-label with an FDA-approved drug that already is produced by the pharmaceutical giant.

Merck is the producer of ivermectin, which has been shown to be effective in an least 65 controlled studies and 32 randomized controlled trials to fight COVID-19 as a preventative and early- and late-stage treatment. Studies have demonstrated its ability to inhibit the replication of SARS-CoV-2 as well as its strong anti-inflammatory properties.

Yet, as Rep. Louie Gohmert pointed out in a commentary this week, the “government alphabet agencies, the medical industrial complex, and their willing accomplices in the media” have made ivermectin “the latest naughty word which will get you censored on social media and mocked and belittled by late-night ‘comedians.’”

Gohmert noted Merck itself has discouraged using ivermectin to treat COVID-19. The Texas lawmaker spotlighted the fact that the cheap and effective ivermectin would directly compete with the new drug it is developing, called molnupiravir. Unlike ivermectin, molnupirvar would be patented, the congressman pointed out, creating the potential “to rake in billions of dollars.”

The federal government already has a $1.2 billion contract with Merck to buy molnupiravir at $700 per 10-pill course, reported economic policy analyst Phil Kerpen, the president of the non-profit American Commitment. Displaying a copy of the contract on Twitter, he added that the government holds options for up to $3.7 billion.

Dr. Pierre Kory, who has testified of ivermectin’s effectiveness against COVID-19 in Senate testimony, said Friday that while Merck says molnupiravir reduces hospitalization and death by 47%, studies show ivermectin’s rate is 88%.

#pharmageddon on IVM occurred to protect profits. Merck’s news today is great since patients will have early Rx but also sad given the high cost and lives lost compared to IVM. Molnupiravir=47% reduction in hospitalization/death while IVM=88% reduction. https://t.co/wPwPk9IOuo

On Friday, Merk said molnupiravir showed “compelling results” in clinical trials, cutting the risk of hospitalization or death in patients with mild to moderate COVID-19 by about 50% in a late-stage trial.

If approvied by the FDA, it would become the first oral antiviral for COVID-19.

“More tools and treatments are urgently needed to fight the COVID-19 pandemic, which has become a leading cause of death and continues to profoundly affect patients, families, and societies and strain health care systems all around the world,” Merck’s CEO Robert Davis said in a statement.

Fauci told CNBC “we always hesitate to make any timelines,” but the FDA will move “as quickly as they possibly can” to examine the data.

“I mean this is a profound game-changer to have an oral pill that had this kind of effect,” he said.

Merck’s antiviral pill could provide an effective way to treat Covid-19, health officials said on Friday, but they added that vaccines remained the best tool to prevent infections. https://t.co/B07p2TTYfD pic.twitter.com/FLw2aPMXAb

Gohmert wrote that while ivermectin “has been used by certain brave doctors around the world to treat COVID-19 for over a year now,” it recently became the target of a “deadly dystopian disinformation campaign,” dismissing it as a “horse dewormer.”

But nearly 4 billion doses of ivermectin have been prescribed for humans over the past 40 years, and the CDC recommends that most refugees coming to the U.S. from the Middle East, Asia, North Africa, Latin America and the Caribbean receive invermectin, Gohmert wrote. The drug’s inventors won a Nobel Prize for its success in treating parasitic diseases in emerging nations, and it’s considered by the World Health Organization to be an “essential medicine.” The Department of Homeland Security’s “quick reference” tool on COVID-19 states the drug has reduced viral shedding in a clinical trial.

Ivermectin also has a better safety record than several vitamins, with an average of only 160 adverse events reported every year.

And Gohmert argued that from 10% to 20% of all prescriptions are prescribed “off label,” according to the American Medical Association Journal of Ethics, as ivermectin is for COVID-19.

“In short, there is no humane, logical reason why it should not be widely used to fight against the China Virus should a patient and doctor decide it is appropriate to try in that patient’s case,” Gohmert said.

The congressman said “the evil, deadly, coordinated globalist attacks we are currently witnessing on ivermectin will go down in history as a vicious crime against humanity; a grievous public health policy error that can only be explained by following the money.”

“Many top doctors,” he concluded, “agree that hundreds of thousands of American lives could have been saved had early treatment protocols such as ivermectin and hydroxychloroquine not been so maliciously vilified by authority figures, some pharmaceutical companies, and healthcare providers who just so happen to have financial incentives to suppress the truth about these cheap, effective drugs.”

In September, more than 8,600 scientists and physicians from around the world signed a declaration condemning public policy makers of “crimes against humanity” for restricting life-saving treatments such as ivermectin and hydroxychloroquine while quashing debate and scientific inquiry.