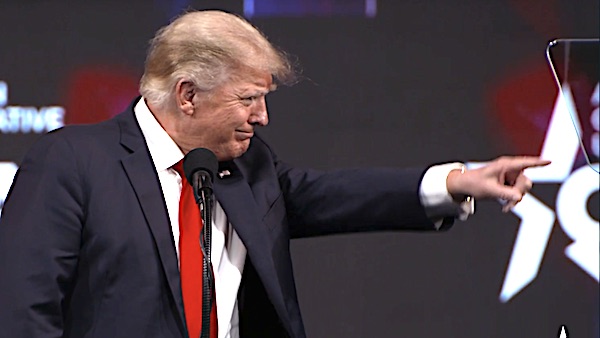 A vaguely written report in the Guardian charges that Vladimir Putin had compromising information on President Trump and “personally authorized a secret spy agency operation” to support his 2016 candidacy.

The report is reminiscent of the multiple reports during that campaign period that wildly claimed the Trump campaign was colluding with Russia on the election, an allegation repeated over and over by America’s leading Democrats who since have been proven to have had no basis in fact in making the claims.

The report itself is packed with vague qualifying terms such as the proof is from “what are assessed to be leaked Kremlin documents,” “the papers suggest,” and, “Western intelligence agencies are understood to have been aware of the documents for some months and to have carefully examined them.”

The legacy media outlet suggests that the “Kremlin papers” “appear to show” that Putin plotted to put Trump in the White House.

The goal, claims the Guardian, was that the Kremlin wanted “social turmoil” in the United States, which actually developed at the end of his term as radical and violent leftists politicized the death of George Floyd at the hands of police to torch and tear down hundreds of millions of dollars of businesses in more than 100 cities.

The full extent of the “social turmoil” in America was fully realized after Joe Biden’s ascent to the Oval Office and his agenda to destroy American lives through abortion, his advocacy for gender dysphoria-afflicted individuals and his massive taxation plans were revealed.

The Guardian claims the papers talk about a Russian spy “operation” to endorse a “mentally unstable” Trump. Those comments were from a “closed session” of Russia’s national security council, according to those documents “assessed” by an unknown evaluator to be from the Kremlin.

The publication said, “The Guardian has shown the documents to independent experts who say they appear to be genuine. Incidental details come across as accurate. The overall tone and thrust is said to be consistent with Kremlin security thinking.”

The Guardian did admit that it contacted Russian officials, and Dmitri Peskov, a spokesman for Putin, said the papers were “great pulp fiction.”

The Guardian, in its article by Luke Harding, Julian Borger and Dan Sabbagh, also claimed the Kremlin had “kompromat,” or “potentially compromising material” on Trump, but it doesn’t explain what that would be, except that it is listed in an appendix, which was not accessed.

The report alleges Putin and his agency chiefs worked out a strategy to interfere in the U.S. election on behalf of Trump. Putin repeatedly had denied accusations he interfered in the election.

The report said evidence confirms there were “warning signs” throughout the probe. FBI agents were told that the Hillary Clinton-funded Steele dossier, which was used to obtain warrants to spy on the Trump campaign, likely had been compromised by Russian intelligence disinformation.

And the agents learned that Clinton herself “might be carrying out an epic dirty political trick to vilify Trump with false information to distract from her own scandals.”

“But if ever there were red lights screaming for the FBI to end the counterintelligence probe, they were flashing during a harrowing 20-day window in January 2017 as Barack Obama was leaving office and Trump was coming in,” the report said.

During that period, “nearly every major assumption of the FBI’s Russia collusion theory was gutted.”

A Senate Intelligence Committee report then confirmed it found no evidence that the Trump campaign conspired with the Russian government to influence the 2016 election.

It featured a scathing criticism of the FBI’s handling of the dossier produced by former British spy Christopher Steele.

“The FBI gave the Steele Dossier unjustified credence, based on an incomplete understanding of Steele’s past reporting record,” the report said. “The Committee found that, within the FBI, the dossier was given a veneer of credibility by lax procedures and layered misunderstandings.”

For one thing, agents ignored the fact that Steele had been dismissed as an intel source because of his leaks to media.

The use of that dossier later was put under investigation by special counsel John Durham, who has yet to release a report on his findings.

When Joe Biden moved into the White House, his administration immediately worked to thwart President Trump’s plans to declassify information about the political attack.

But Durham’s investigation appears to have aligned with a Justice Department inspector general’s report that said that FBI misled the Foreign Intelligence Surveillance Court in order to get warrants to spy on Trump campaign aide Carter Page.

Former FBI attorney Kevin Clinesmith pleaded guilty in Durham’s investigation on Aug. 19. He admitted in the plea agreement that he altered an email from the CIA in June 2017 to downplay Page’s past relationship with the spy agency.

Commentators were openly skeptical of the Guardian’s allegations.

An editorial at Twitchy said, “Here we go again? There are MAJOR ISSUES with that Guardian story on allegedly leaked Kremlin documents showing a plot to elect Trump.”

On social media, Jerry Dunleavy, of the Washington Examiner, warned, “May I suggest being just a bit skeptical here. The alleged leaked Kremlin docs make undisproveable broad claims about kompromat on Trump, but the specifics on that alleged kompromat (which could at least be investigated for their veracity) remain hidden.”

Might I suggest being just a bit skeptical here. The alleged leaked Kremlin docs make undisprovable broad claims about kompromat on Trump, but the specifics on that alleged kompromat (which could at least be investigated for their veracity) remain hidden.https://t.co/0DpNSHPpgH pic.twitter.com/ueZ5KrFutz

This Guardian story is likely to make big waves. I would remain somewhat cautious for now, however. For a “leak” of this magnitude, we need at least some details on the chain of custody. Also note the Guardian’s own hedging (“papers appear to show”) https://t.co/U3rq2Ac8S6

Explained Twitchy, “Glenn Greenwald points out in this must-read thread that the author, Luke Harding, is also the [reporter] who has ‘published many false stories, championed the Steele dossier, and claimed Trump was long a Russian agent.”

The part of the media that feigns anger at misinformation is uncritically promoting a story today by Luke Harding that Russia was blackmailing Trump — the same Harding who has published many false stories, championed the Steele Dossier and claimed Trump was long a Russian agent. pic.twitter.com/6gL7XT59cz

Now suddenly, Harding claims he obtained leaked, highly sensitive Kremlin documents that just so happen to prove all the lies he’s been peddling for years, that not even Mueller’s huge team found. Because it advances liberals’ interests, journalists are uncritically spreading it. pic.twitter.com/0Cu11x7uL1