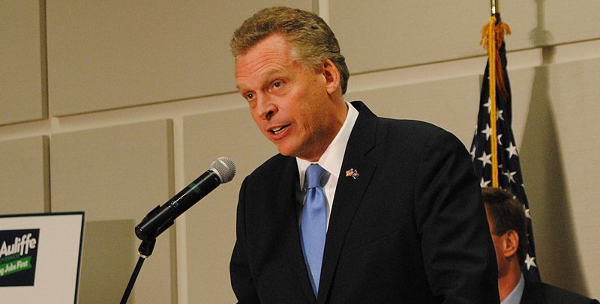 Opposing the Marxist-based Critical Race Theory is racist, but defining CRT doesn’t matter, because it’s not being taught in schools.

That was the stance taken by former Democratic National Committee chairman and Clinton acolyte Terry McAuliffe in a televised candidate forum Thursday night in his run for governor of Virginia.

“It’s not taught in Virginia, and it’s never been taught in Virginia,” McAuliffe asserted.  “And as I’ve said this a lot, it’s a dog whistle. It’s racial, it’s division and it’s used by (Republican nominee) Glenn Youngkin and others; it’s the same thing with Trump and the border wall, to divide people. We should not be dividing people in school.”

McAuliffe, who served as Virginia governor from 2014 to 2018, was asked by WAVY-TV anchor Anita Blanton to define Critical Race Theory, which in simple terms views the world through the Marxist lens of oppressor vs. the oppressed, regarding all white people as oppressors of black people, regardless of personal behavior.

“Anita,” McAuliffe protested. “It is not taught here in Virginia.”

“But how do you define it?” pressed Blanton, who is black.

“Doesn’t matter,” McAuliffe replied, waving his hands. “It’s not taught here in Virginia, so I’m not going to spend my time …”

Blanton interjected, asking for his “thoughts on what [CRT] is.”

McAuliffe continued, “I’m not even spending my time, because the school board and everyone else has come out said it’s not taught.”

Opposing CRT, he said, “is racist.”

Blanton argued: “But if we don’t have a definition, how can we say it’s racist (to oppose it)? I just want a definition.”

“It’s not taught here in Virginia. We can ask about any topic,” McAuliffe said, once again dodging the question.

“Here’s what I’ve said all along, and it really bothers me, you know, it really bothers me,” he continued. “This whole idea of stirring parents up to create divisions — our children are going through such challenges today because of COVID, and we’re talking about something here today, wasting precious viewers’ time.”

At a debate last month with Republican rival Glenn Youngkin, McAuliffe defended his veto of a bill that would have allowed parents to be informed about controversial materials provided in Virginia schools.

“I’m not going to allow parents to come into schools and actually take books out, make their own decision,” McAuliffe explained. “Yeah, I stopped the bill that – I don’t think parents should be telling schools what they should teach.”

See the exchange Thursday on CRT:

Christopher Rufo, who has been a leader in exposing the surge in the implementation of Critical Race Theory in K-12 education since the death of George Floyd, said Friday that McAuliffe is lying.

Rufo points, for one, to the documentary evidence that two school districts in Northern Virginia, in suburban Washington, hired the consulting firm Panorama, which specializes in Critical Race Theory training programs.

We have the receipts. pic.twitter.com/PSIKFWvNuZ

Rufo, a senior fellow at the Manhattan Institute, said that for months, the likes of MSNBC and the Washington Post have insisted that conservatives “can’t define critical race theory.”

“But as it turns out, it’s Terry McAuliffe who can’t define it — so instead, he calls Virginia parents ‘racist,’” Rufo wrote on Twitter.

“We have them in a corner. Keep pushing.”

For months, MSNBC and WaPo insisted that conservatives “can’t define critical race theory.” But as it turns out, it’s Terry McAuliffe who can’t define it—so instead, he calls Virginia parents “racist.”

We have them in a corner. Keep pushing.pic.twitter.com/pOtkR3tyvX

Further evidence of the implementation of CRT in public schools can be seen in the pledge last July by the nation’s largest teacher’s union, the National Education Association, to educate members in all 50 states who “want to learn more and fight back against anti-CRT rhetoric.”

The NEA’s plan will provide a “study that critiques empire, white supremacy, anti-Blackness, anti-Indigeneity, racism, patriarchy, cisheteropatriarchy, capitalism, ableism, anthropocentrism, and other forms of power and oppression at the intersections of our society, and that we oppose attempts to ban critical race theory and/or The 1619 Project.”

The New York Times “1619 Project,” which is being implemented in public schools, contends that America was founded on slavery and is irredeemably racist.

The NEA also wants to partner with Black Lives Matter to create special education materials based on Critical Race Theory. And it urges the implementation of new special days in the school calendar, including a celebration of George Floyd’s birthday on Oct. 14. The union envisions it as “a national day of action to teach lessons about structural racism and oppression.”

The head of another major teachers union, the American Federation of Teachers, has vowed to defend educators who implement CRT in classrooms.

BREAKING: The nation’s largest teachers union has approved a plan to promote critical race theory in all 50 states and 14,000 local school districts.

In April, the Department of Education proposed a new regulation under American History and Civics Education programs that would give preference to grant applications for curricula that incorporate the 1619 Project and the ideas of radical “antiracist” scholars such as Ibram X. Kendi.

In July, however, when Education Secretary Miguel Cardona opened the invitation to apply for grants under the program, the references to preferred ideas and curriculum were gone, reflecting the impact of parents across the nation who have protested CRT at school board meetings.

Cardona said the program “has not, does not, and will not dictate or recommend specific curriculum be introduced or taught in classrooms.”

“Those decisions are – and will continue to be – made at the local level.”

White House press secretary Jen Psaki was asked in July by a reporter about President Biden’s stance on CRT in light of the NEA resolution defending it.

Psaki didn’t push back on the use of the term Critical Race Theory, replying that children should learn about existing “systemic racism.”