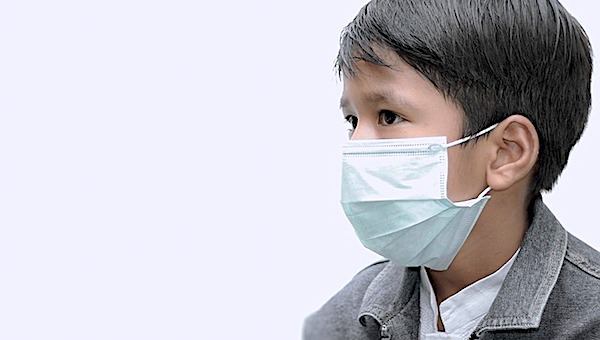 An article in left-leaning magazine The Atlantic presenting evidence that school children should not be required to wear a mask is prompting Twitter users to flag it for misinformation and call for a retraction.

In “The Downsides of Masking Young Students Are Real,” Vinay Prasad, a hematologist and oncologist and associate professor of epidemiology and biostatistics at UC San Francisco, concludes that the “potential educational harms of mandatory-masking policies are much more firmly established, at least at this point, than their possible benefits in stopping the spread of COVID-19 in schools.”

A similar story published by New York magazine was titled “The Science of Masking Kids at School Remains Uncertain.” Author David Zweig cites a large-scale study published by the Centers for Disease Control and Prevention that found no statistically significant difference in schools that required students to wear masks compared to schools where masks were optional.

Zweig pointed out that the findings, along with other mitigation efforts that have been shown to have statistically insignificant results, “cast doubt on the impact of many of the most common mitigation measures in American schools.”

On Twitter, Dr. Joy Henningsen, a medical news contributor featured in publications such as Business Insider and Yahoo News, “reported” The Atlantic to Twitter for “misinformation.”

“I respected your coverage of the pandemic so much last year,” she wrote. “But you elevating an irresponsible take (ie, presenting it as the “other side”) gives it credibility when it deserves none. Not in my wildest dreams did I imagine I’d have to report a @TheAtlantic post for misinformation.”

She followed through with her threat to flag the story on Twitter and urged The Atlantic to retract it, contending the magazine had made the jobs of health-care professionals “harder.”

“Those of us fighting misinformation online will now have this used against us,” she said. “This article will be shared over and over in dark, uninformed circles. Please do not prize web hits above the truth. I implore you to retract this piece.”

I respected your coverage of the pandemic so much last year. But you elevating an irresponsible take (ie, presenting it as the “other side”) gives it credibility when it deserves none.Not in my wildest dreams did I imagine I’d have to report a @TheAtlantic post for misinformation

However, Jennifer Sey was among the Twitter users who invited Henningsen to engage with the evidence.

“Which part is misinformation? Not generally but specifically?” she asked. “Throughout Europe they aren’t masking young children largely for the reasons cited here. Is the continent entirely under the spell of @VPrasadMDMPH and @TheAtlantic?”

CDC statistics, meanwhile, show children generally do no spread COVID-19 and have little risk of any adverse effects. The seasonal flu is more deadly among children than COVID-19, and the swine flu one decade ago was six times more deadly. The survival rate for children under age 20 who get COVID, according to the CDC, is 99.997%.

Many European countries, including Denmark, Norway and Sweden, are not requiring masks for school children.

Norway has never recommended face masks for schools, and the Norwegian Institute of Public Health explicitly advises against masking primary school-aged children. In Sweden, masks are no longer recommended on public transit, even at rush hour.

In most of the United Kingdom, the New York Times reported, elementary school children and their teachers were not required to wear masks during the delta surge there earlier this year.

“The U.K. has always, from the beginning, emphasized they do not see a place for face coverings for children if it’s avoidable,” said Dr. Shamez Ladhani, a pediatric infectious-disease specialist at St. George’s Hospital in London and an author of several government studies on the virus and schools.

If you support forcing kids to wear masks for their safety, then you’re egregiously misinformed.

If you support forcing kids to wear masks to protect adults, then you’re asking they sacrifice their childhood to protect you, which is repugnant.

On Friday, Britain’s Joint Committee on Vaccination and Immunisation concluded the net benefit of vaccinating 12 to 15 year-olds was too small. Nevertheless, the Guardian of London reported, lawmakers might for the first time defy their advice and push ahead with COVID shots for that age group.

The JCVI cited studies showing the risk of myocarditis, a form of heart inflammation, in children who receive the vaccine. While the condition is extremely rare, there is uncertainty about any longer term effects.

Earlier this week, BBC News reported the world’s largest study on the risk of “long COVID” in children found it is much lower than many had feared.

The researchers, led by University College London, said they were “reassured” after they surveyed 11- to 17-year-olds testing positive for coronavirus in England between September and March.

Meanwhile, Montgomery County Public Schools officials in Maryland are requiring any student who exhibits a COVID symptom — and the student’s close contacts — to quarantine until the student returns a negative test.

NEW: MCPS has, indeed, updated its quarantine guidelines. If a student exhibits a COVID symptom or symptoms, close contacts will need to quarantine until the student returns a negative test. This will affect ES the most, as they aren’t vaxxed. More info expected later.

President Biden’s top health advisor, Dr. Anthony Fauci, said during a recent panel discussion streamed online that whether students “are vaccinated or not, they need to wear a mask.”

The Biden administration recently directed Education Secretary Miguel Cardona to employ “all of his oversight authorities and legal actions” against governors such as Ron DeSantis of Florida who have supported legislation to prevent schools from implementing mask mandates.

The most recent CDC guidelines recommend mask use for anyone 2 years or older in public settings and when around people who don’t live in their household.​ However, in March 2020, the CDC said masks “are usually not recommended” in “non-health care settings.”

The same month, the World Health Organization recommended people not wear face masks unless they are sick with COVID-19 or caring for someone who is sick.

“There is no specific evidence to suggest that the wearing of masks by the mass population has any potential benefit. In fact, there’s some evidence to suggest the opposite in the misuse of wearing a mask properly or fitting it properly,” said Dr. Mike Ryan, executive director of the WHO health emergencies program in March 2020.

A study earlier this year by the University of Louisville found that state mask mandates did not help slow the spread of COVID-19.

The researchers found that “masks may promote social cohesion as rallying symbols during a pandemic, but risk compensation can also occur.”

The first large, randomized controlled trial of its kind showed no statistically significant difference in COVID-19 cases between people who wore masks and those who did not.

A study by the Centers for Disease Control in October indicated that Americans were adhering to mask mandates, but the requirements didn’t appear to have slowed or stopped the spread of the coronavirus. And further, it found, mask-wearing has negative effects.

The Association of American Physicians and Surgeons has compiled a page of “Mask Facts” showing that the consensus prior to the coronavirus pandemic was that the effectiveness of mask-wearing by the general public in slowing the spread of a virus is unproven, and there’s evidence it does more harm than good.

YouTube didn’t like an exchange in which Harvard epidemiologist Martin Kulldorff, responding to a question by DeSantis, said “children should not wear face masks, no. ”

Stanford’s Jay Bhattacharya said it is “developmentally inappropriate” for children to wear masks and it “just doesn’t help on the disease spread.”

“I think it’s absolutely not the right thing to do,” he said.

Bhattacharya said that “if we went back a year, a lot of experts would say that wearing masks for the general public is not evidence-based.”