Limbaugh's wife takes microphone: 'The truth is it's not time to panic' 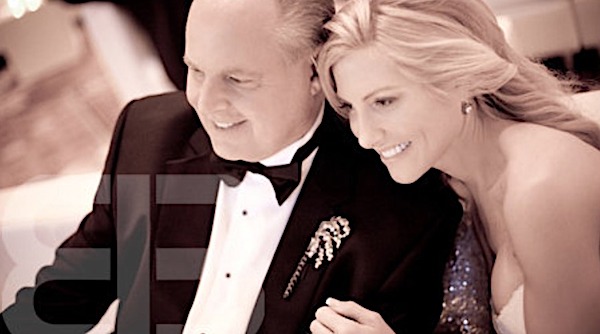 “The truth is it’s not time to panic,” said Mrs. Limbaugh, as she took to the airwaves on her late husband’s national broadcast Monday. “There will be no other Rush Limbaugh ever … but I hope we all find in in ourselves to carry Rush’s legacy … in our own lives.”

She says a virtual memorial for her husband is now in the works.

“We are in the initial stages of planning a celebration of life that will be able to be viewed by all the audiences and friends at some time in the future … We don’t have an exact date just yet.”

Rush Limbaugh, the most-listened to voice on the radio for more than 32 years, died Wednesday after battling advanced lung cancer for more than a year, and Kathryn acknowledged Monday, “It’s been a very difficult time, as it probably has been for everyone who has been listening all these years.”

She said Rush is now “in a good place. He’s in heaven looking down on us, so that gives us some comfort.”

As she was interviewed by guest host Mark Steyn, Mrs. Limbaugh opened up on some personal moments not well-known among the public, including her first meeting the “doctor of democracy” while she was inviting A-list celebrities to an event at the Floridian Hotel while she worked for the foundation of South African golfing great Gary Player.

Kathryn admitted she was “not keen” on inviting Rush to the bash, based on what she had heard of him in the media.

“I put him down on the B or C [list] just based on what I thought I knew of him,” she said with a giggle, adding “I don’t think he’s very happy now if he’s listening now.”

“He came into the Floridian, he walked in, he was extraordinarily humble and kind,” she continued. “From that moment, I knew that everything you read and hear isn’t always accurate.”

“We got very close from the early days of that meeting.”

Regarding their first date, “He invited me to dinner as just a friend. … We went dinner here in Palm Beach. We met in the restaurant and he was such a gentleman.”

“He was very intriguing from the first moment,” she recounted, adding they were in “buddy” mode. “It just flourished from there and it became more than that.”

Kathryn indicated Rush was a creature of habit regarding his daily routine.

“He would wake up probably about 8 o’clock, take a shower, feed his cat,” she said. “He would head to the studio probably about 8:30 and do show prep. … One thing about Rush is that the never stopped working.
From the moment he got home after the show, he may have given himself 15 or 20 minutes before preparing for the next show.”

Kathryn explained it was difficult to deliver the news of her husband’s passing last week, because she was aware millions of Americans feel they’re related to Rush.

“Rush for all of us … is a family member,” she said. “I very much felt that I was sharing that news with family, so I hope you all know that I fully understand the pain that you’re going through.”

She surmised what Rush might be thinking since he died.

“While he’s very sad that we are suffering, I believe that he is happy because he knows that we will carry on” finding a way to honor her husband.

A caller asked how it came about that British rock star Elton John performed at the pair’s wedding.

“Both Rush and I loved Elton John for many years. Ironically, he happened to be staying in the same hotel as were were in Hawaii,” Kathryn explained. “We said to each other, ‘How about we invite Elton John to perform our wedding?’”

“I wrote a letter to Elton John and told him how much we loved and adored him,” she continued. “One thing led to another and he accepted very graciously.”

She says Rush and Sir Elton John kept in touch after the wedding.

“There are actually quite a few similarities that might not come across on the surface,” she noted of the two larger-than-life characters.

“Rush’s favorite song and mine is ‘Your Song’ by Elton John,” she added. “I played that for Rush in his final days and he was able to remember our wedding and Elton John in particular.”

Will Kathryn become a regular part of the Rush Limbaugh radio broadcast?

“I’m definitely not America’s Anchorman, but I’ll fill in now and then,” she said.

Steyn noted that once she mentioned her role as an on-air fill-in for her husband, “An amazing number of people seem to be seconding that” on Twitter, adding he might need to create a radio ident for “America’s Anchorlady” were it to become reality.

“The best gift we can give Rush … is to continue what he stood for in the best possible way,” Kathryn said.

Regarding the “Rush Revere” children’s book series on American history authored by Rush and Kathryn Adams Limbaugh, as she’s a descendant of founding father John Adams, Kathryn indicated: “We do hope to continue the series and expand on them as Rush would … We are also possibly looking at making a cartoon.”

“I don’t know exactly when we will be able to but we hope to in the months and years ahead. … We have plenty of topics to cover and plenty of books to write at the right time.”