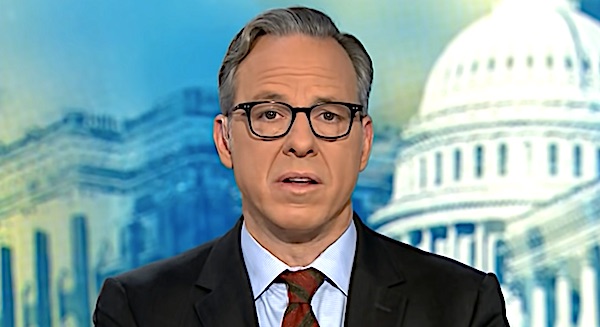 After being inundated with requests from numerous journalists, Project Veritas is finally releasing the name of the latest CNN producer embroiled in a disturbing sex scandal, allegedly openly fantasizing to others about sex with young teen girls, as well as soliciting nude images of teenagers.

“After ensuring the family involved is safe, Project Veritas has made the decision to release the name, Rick Saleeby,” said James O’Keefe, the group’s head, noting in bold letters that “Saleeby is a producer on ‘The Lead with Jake Tapper.’”

O’Keefe says he reached out to the cable news network multiple times for comment, but no one has responded to date.

He further explained the mother of the children involved in the tragic story sent Project Veritas a heartfelt note, which stated, in part:

I wanted to reach out to sincerely thank you again. I am very grateful toward you guys and everything you’ve done for me and my children. Our world has just been completely flipped upside down, but none of that matters. We are all safe. I’m hoping, praying, and pushing for charges to be brought against him, so he can never do this to another child/family again.

I want the public and any predators to know, without a shadow of a doubt, that I will go to the absolute ends of the earth to protect my babies. And I am tremendously grateful that you guys have saved us all from him.

Despite the hardships ahead, I am going to continue to sit with these feelings of gratitude toward you guys and the woman who provided you with the information. Gratitude will get us through to the other side of all this. Thank you from the bottom of my heart and Merry Christmas.

Interestingly, Saleeby had been quoted by Project Veritas in a 2019 sex scandal involving another CNN producer, Steve Brusk.

Brusk reportedly resigned just weeks after being implicated by a network colleague of sexual misconduct, in leaked videos.

Fox News reported Brusk, “CNN Politics’ supervising producer, was accused of ‘making advances’ at female employees at social gatherings. He allegedly would ‘put his arms around them’ and “try and touch their leg’ as well as being ‘flirty and inappropriate’ in email exchanges, according to Rick Saleeby, whom Project Veritas identified as a senior producer for ‘The Lead with Jake Tapper.’”

“I’ll tell you this. In this climate that’s going on right now, he definitely would have been fired,” Saleeby told an undercover PV journalist, who was secretly recording the conversation.

As WND reported, the embattled CNN has been hit recently by a series of sex scandals including one of its personalities, Jeff Toobin, exposing himself on a Zoom call, anchor Chris Cuomo fired for advising his brother during an investigation into sex harassment claims, anchor Don Lemon accused of sex harassment, and Cuomo’s producer John Griffin allegedly attempting to entice minors into unlawful sexual activity.

The Liberty Daily openly wondered: “What is it about CNN that makes them hire the sickest pedophiles around? Last week, it was revealed that one of Fredo Cuomo’s former producers, John Griffin, had been arrested for allegedly luring girls as young as 9-years-old so he could rape them to teach them ‘sexual submissiveness.’

“Now, a Project Veritas whistleblower, Janine Bonanni, has come forward with text messages and audio recordings of ANOTHER CNN producer fantasizing about and shooting sick pictures of his 14-year-old step-daughter and asking Bonanni to send him nude photos of her 15-year-old daughter.”

Project Veritas reported videos and texts in the Saleeby case “show a primetime producer at CNN fantasizing about sex acts with a child in graphic detail.”

“The source, who obtained evidence for authorities, came to Project Veritas after she was uncertain proper action would be taken,” PV reported. “The producer in question also solicited sexually explicit photos of the source’s underage daughter.”

The source explained her “disgust” with the producer’s alleged actions and “was compelled to come forward, because ‘these people with power seem to get away with it.’”

The source is a woman who engaged in a sexual relationship with the producer in question for a number of years, PV reported.

Only days earlier, CNN employee John Griffin fired and arrested on three counts of using a facility of interstate commerce to attempt to entice minors to engage in unlawful sexual activity.

Federal prosecutors said the 44-year-old Griffin was indicted on various charges, and at the time, CNN said those claims “are deeply disturbing.”

He had worked at CNN since 2013, but was accused of using “the messaging applications Kik and Google Hangouts to communicate with people purporting to be parents of minor daughters, conveying to them, among other ideas, that a ‘woman is a woman regardless of her age,’ and that women should be sexually subservient and inferior to men.”

He allegedly attempted to “persuade parents to allow him to train their daughters to be sexually submissive,” prosecutors said.

Griffin also allegedly flew a mother and her 9-year-old daughter to Boston in 2020 and took them to a Vermont home, where “the daughter was directed to engage in, and did engage in, unlawful sexual activity.”

Commented the Western Journal, “The details of the indictment are absolutely sickening.”

Chris Cuomo, an anchor, was fired this month after the New York attorney general’s office released new information about the extent of his role advising and assisting his brother, former New York Gov. Andrew Cuomo, who was being investigated on sexual harassment allegations.

Chris Cuomo’s dismissal came only months after he admitted helping craft his brother’s response to Andrew Cuomo’s sex scandal allegations, even as he was reporting on the very same issue.

It was CNN contributor Jeffrey Toobin who was “symbolically fired” last year “after he was busted engaging in, um, solo sexual impropriety while on a Zoom call with female colleagues, only to rehire him this year once the heat was off,” the Journal said.

Then there’s Lemon, who is “also facing allegations of sexual harassment and assault by a man who says the anchor subjected him to obscene treatment during an altercation at a bar in 2018,” the Journal said.

“You have to wonder: Are all these allegations of sexual harassment and abuse just a big coincidence, or is this reflective of a depraved company culture? At a time when the political left, at the behest of social radicals, celebrates the widespread acceptance of promiscuity and all manner of sexual indulgence, it’s easy to point the finger not just at a left-wing cable network but at a culture that glorifies sex without attachment and attacks traditional sexual ethics as ‘oppressive,’” the Western Journal said.