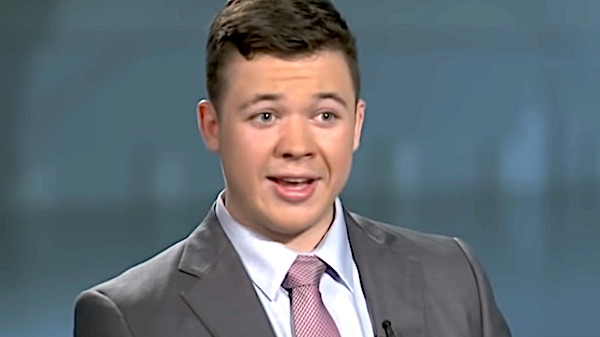 The comments came in an interview with Fox News Tucker Carson just days after Rittenhouse was acquitted by a Wisconsin jury of charges from the shooting deaths of two men who were attacking him during a riot in Kenosha last year.

Biden had falsely labeled Rittenhouse a white supremacist at the time. In fact, Biden made the allegation in a campaign ad, using the teen’s situation politically.

“Mr. President, if I could say one thing to you, I would urge you to go back and watch the trial, and understand the facts before you make a statement,” Rittenhouse said.

“It’s actual malice; defaming my character for him to say something like that.”

Fox News explained that actually Biden was just one of the politicians condemning Rittenhouse before the fact. During the trial, House Democratic Caucus chairman Hakeem Jeffries declared on social media Rittenhouse should be locked up and the key “thrown away.”

The younger Rittenhouse was acquitted of charges for shooting and killing two violent protesters during a riot in Kenosha, and shooting and wounding a third. The jury’s apparently agreed it was self-defense.

But Biden had posted a video in his attacks on President Trump that accused him of failing “disavow white supremacists.” It included a brief exchange with television personality Chris Wallace bullying Trump by telling him to “say it” about “white supremacists.”

Biden’s video included an image of Kyle Rittenhouse in the streets of Kenosha interspersed with images of white protesters in Charlottesville and Portland.

There’s no other way to put it: the President of the United States refused to disavow white supremacists on the debate stage last night. pic.twitter.com/Q3VZTW1vUV

“When I saw that I was shocked, I was angry. President Biden don’t [sic] know my son whatsoever, and he’s not a white supremacist. He’s not a racist. And [Biden] did that for the votes. And I was so angry for a while at him and what he did to my son, he defamed him,” Wendy Rittenhouse said.

She had driven her son to Kenosha, Wisconsin, on Aug. 25, 2020, during riots that developed there after police shot and injured Jacob Blake, a suspect they had confronted.

Rittenhouse has explained he was there to help protect property from the arsonists in the crowd of rioters.

During the interview, Rittenhouse also said he didn’t think police in Kenosha were given the support they needed when riots broke out.

“The governor, Tony Evers, failed the community and there should have been a lot more resources to help with that,” Rittenhouse said.

He also described how, after the shootings, he tried to turn himself in to Kenosha police, but they told him to “go home.”

“I go back to CarSource Lot Number 2, and I tell everybody there what happened. I said, ‘I had to do it.’ I was just attacked. I was dizzy. I was vomiting. I couldn’t breathe,” he said. “We couldn’t – I wanted to turn myself into the police in Kenosha but I wasn’t able to because they weren’t accepting visitors, apparently with the barricades and the fence up so we ended up turning myself into the Antioch police department.”

The verbal assaults like that from Biden haven’t stopped since his acquittal, either. Rep. Jerry Nadler, D-N.Y., openly wondered whether, because of the acquittal, the Justice Department should investigate the self-defense “precedent.”