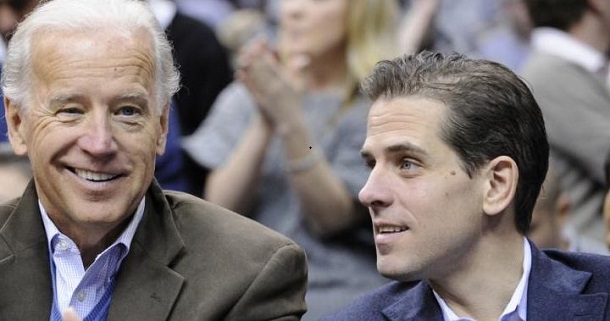 While Joe Biden was campaigning for president and scandals involving his son, Hunter, kept surfacing, he assured Americans, “I have never discussed with my son or my brother or anyone else anything having to do with their businesses. Period.”

That’s despite a recent investigation by the Daily Wire that revealed Hunter Biden had his fingers in business pies in Saudi Arabia, Ivory Coast, Oman, Qatar, Taiwan, Zimbabwe, Greece and Mexico, in addition to his highly publicized business dealings in China and Ukraine while is father was vice president.

Further, Breitbart has reported he took 411 trips across 29 countries during the years his father was vice president, including 23 flights in or out of Joint Base Andrews, where Air Force Two is stationed.

Now the New York Post confirms that Joe Biden actually met with Ukrainian, Russian and Kazakhstani business associates of his son’s “at a dinner in Washington, D.C., while he was vice president.”

The report reveals that confirmation is from records on Hunter Biden’s abandoned laptop.

The report said the dinner was April 16, 2015, at the private “Garden Room” at Café Milano in Georgetown.

The day after, Vadym Pozharskyi, an executive of the Ukrainian energy company Burisma, sent Hunter Biden a noting thanking him for introducing him to his father, the Post documented.

“Dear Hunter, thank you for inviting me to DC and giving an opportunity to meet your father and spent [sic] some time together,” Pozharskyi wrote. “It’s realty [sic] an honor and pleasure.”

Burisma was, at the time, paying Hunter Biden $83,333 a month to be on its board, even though he lacked experience in the energy industry. But he did have a father who was vice president, and in charge of Ukraine policy for the Barack Obama administration.

In fact, Joe Biden openly boasted of threatening to withhold $1 billion in U.S. aid if Ukraine’s president did not fire the country’s top prosecutor, Victor Shokin, who at the time was investigating Burisma for corruption.

The Post’s report said Hunter Biden assembled the guest list for the special dinner to include Russian billionaire Yelena Baturina and her husband, corrupt former Moscow mayor Yury Luzhkov, who since has died.

It was Baturina who sent $3.5 million on Feb. 14, 2014, to Rosemont Seneca Thornton LLC, one of Hunter Biden’s business entities.

Hunter Biden had confirmed to guests before the dinner the vice president would be there.

In a message to Michael Karloutsos, whose father then was head of the Greek Orthodox Church, Hunter Biden said, “Ok – the reason for the dinner is ostensibly to discuss food security. Dad will be there but keep that between us for now. Thanks.”

The Post reported, “The dinner raises questions about how much Joe Biden, who has claimed ignorance of his son’s activities, knew about Hunter’s dealings with foreign businesses and government officials.”

Hunter Biden’s guest list included three “KZ friends,” “Yelana and her husband,” “you and me” and “WFPUSA people” and others.

The report explained Rick Leach, of WFP USA, an American fundraising arm of the United Nations-related nonprofit, told Hunter Biden after the dinner, “What a fantastic and
productive evening – thank you!”

And a Kazakhstan banker expressed thanks for “opportunities to work closely together.”

Hunter Biden’s laptop was recovered from a repair shop in Delaware and surfaced during the 2020 presidential race. Legacy media joined social media companies in suppressing virtually all information it contained, leaving the Post and a handful of online news organizations reporting on it.

A post-election survey found more than one-third of voters who chose Joe Biden were not aware of the evidence linking the former vice president to corrupt financial dealings with China through his son Hunter. Had they known, according to the survey commissioned by the Media Research Center, President Trump would have won at least 289 Electoral College votes.