Jim Jordan on Jan. 6 violence: Why weren't police given help? 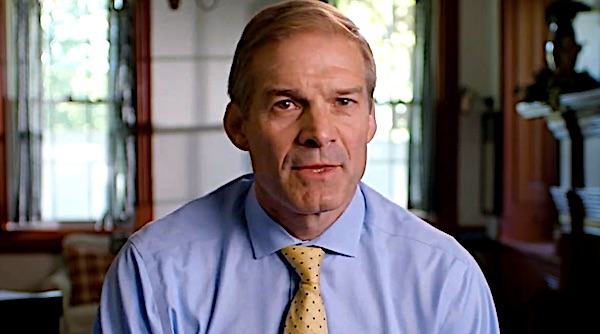 House Speaker Nancy Pelosi’s handpicked committee to review the Jan. 6 violence at the U.S. Capitol, where unruly crowds of supporters of President Trump, and possibly radicals who opposed him, broke windows and doors at the building to enter and vandalize some rooms, met this week.

Several police officers testified how they were subjected to “terrorists” during the hours of conflict, the points raised echoed the Democrat Party’s talking points for the last six months including the long-debunked claim that a police officer died “in the line of duty,” and two “Pelosi Republicans” on the team called it a “coup” and blamed President Trump.

But one of the Republicans picked for the committee by House Minority Leader Kevin McCarthy, who then was denied permission to participate by Pelosi, explained in an interview on Fox that focus needs to be on why the building managers failed to arrange for proper security on that day.

And, U.S. Rep. Jim Jordan said, he would have asked questions that Democrats likely did not want to hear.

Like that very question on inadequate security. “Why didn’t the United States Capitol – the people’s house – have an appropriate security posture on that day and what have we done? Those are the people we need to hear from,” Jordan said.

“That’s the information and testimony we need to get.”

Jordan has explained it is Pelosi who should answer questions about security failures.

“The real question is, and I’ve said this many times, why weren’t those guys who testified today and all the other Capitol Hill police who protect us and protect Capitol Hill, why weren’t they given more help? Why wasn’t more help there that day? And the only person who can answer that question is the speaker of the United States House of Representatives. And I think she thought we were going to keep raising that question and that’s why she didn’t put me on,” he explained.

Congressional leaders, in fact, appoint members of the board that oversees Capitol police operations.

Jordan said the issue should be focused on preventing similar occurrences in the future, and those who did something wrong, “should be prosecuted.”

“Democrats, along with Republicans [Liz] Cheney and [Adam] Kinzinger, will say there are more questions than that, and they want to ask them of Trump, along with the then-White House staff, House GOP Leader Kevin McCarthy, and Jordan himself, who spoke on the phone regularly with the president, including on Jan. 6. That’s fine. Democrats are the majority in the House, and they will do what they want,” he noted.

“But it would have been useful to have a contrarian voice on the committee to raise questions that the majority did not. And that is precisely what Speaker Pelosi made sure would not happen,” he said.

For example, when Capitol Police officer Harry Dunn said law enforcement was not prepared for the aggressiveness and violence of some of the Capitol rioters, York explained, “Committee members did not follow up on Dunn’s statement. Did Dunn’s colleagues at the witness table agree with him? How could such a lack of preparation have happened? The committee did not ask. But there is no doubt that Jordan, were he a member of the committee and present for the hearing, would have followed up.”

He explained Democrats “intended the hearing to be an exercise in messaging.”

So the committee listened to the officers’ complaints.

“But why not ask them about more? What had they been told to expect going in? How did their preparations compare to preparations for other protests? Did anyone raise questions about the level of preparedness prior to the riot? What about afterward? What did their bosses tell them about what had happened? How did they explain the lack of preparation?” York wrote.

Jordan later told York had he been allowed to participate, he would have told police officers: “You guys deserved to have more people there to help you that day. That is the fundamental question — why wasn’t there a proper security posture? I would have said, ‘You deserve better. You protect us. You all deserved to have this place with the kind of support and reinforcements you needed to safeguard the Capitol.’”