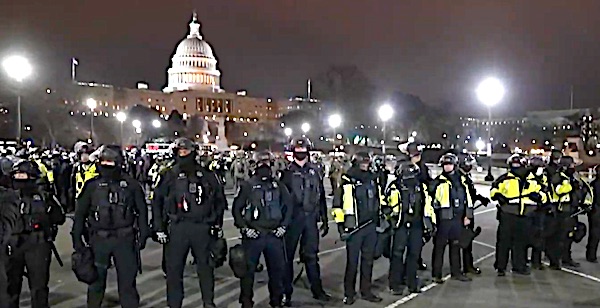 The wife of one of the Jan. 6 protesters who was convicted of being at the rally that ended up with some people rioting at the U.S. Capitol is warning the nation against the “corrupt, evil politicians” now in Washington.

The comments come from Nicole Reffitt, whose husband, Guy Reffitt, was sentenced to 87 months in prison for being at the rally that day.

He didn’t go into the Capitol, and he committed no violence, but the Democrat agenda in Washington has been to prosecute all protesters as if they were among the worst criminals in the system.

Nicole Reffitt said, after her husband was sentenced, “We didn’t expect anything more from the two-tiered justice system here in the DC area. There’s not going to be a 1-6er who will not be persecuted for their political ideology. No matter if you’re a liberal, and independent, a Republican, this is not OK.

“The way that people protest in the future will be determined on their political ideology, if it’s OK to charge them or not to charge them… He went that day because the United States is the last great stand we have. And if we allow our country to be driven into the ground by the corrupt, evil politicians here in this city, one day at your kitchen table the FBI is going to come in and tell you that you stood up at the school board meeting and you are now a domestic terrorist.

The Gateway Pundit reported Reffitt is an oil worker from Texas who was sentenced “for attending the January 6 protests.”

“The FBI wired up his son and sent him into their home to record his dad talking smack. The FBI used the recordings to prosecute the oil worker. The Soviet Union was also famous for turning children against their parents,” the report explained.

The sentence was announced by Judge Dabney Friedrich.

The New York Post explained the punishment was stiff because the defendant was carrying a gun that day.

His actual charges including bringing a gun onto Capitol grounds and obstructing an official proceeding.

Friedrich claimed there was “no merit” to any claims of inappropriate behavior stemming from the 2020 election, even though analysts have concluded that either of two malign influences on the election could easily have changed the victor from Donald Trump to Joe Biden.

Those two factors were the $420 million Facebook’s Mark Zuckerberg handed out, through two foundations, to local election officials who used much of that money for recruiting Democrat voters. Second, there was a coordinated effort among legacy and social media corporations to conceal accurate, and devastatingly bad, reporting about the Biden family cartel’s international business dealings through which Joe Biden, the “big guy,” was in line for profits.

The judge instead claimed Reffitt’s concerns about the 2020 election bordered on “delusional.”

Authorities claimed Reffitt “egged on” others.