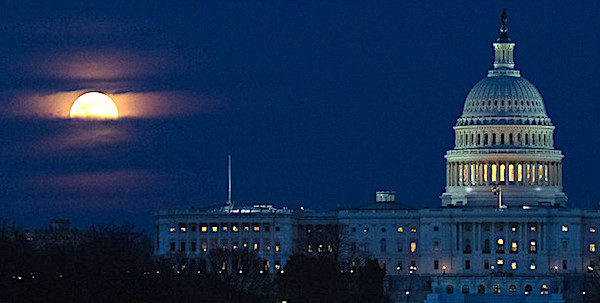 James Dobson, the founder of the James Dobson Family Institute and host of the “Family Talk” radio programs, previously has counseled Americans to live and vote biblical precepts.

He’s called Joe Biden’s declared support for transgender surgery for children “lunacy,” warned the Democrats’ abortion agenda will bring “an open season on the unborn child,” scolded those who support the Biden regime because of its “moral depravity,” and put parents on notice that the “popular culture,” if given the chance, will take their kids “to hell.”

Now he’s calling on Americans to act, specifically to call their members of Congress and express opposition to what he now describes as a “horrific” plan that would ensure Democrats remain in power in Washington.

“President Joe Biden has already issued a slew of radical left-driven executive orders designed to undo much of what the Trump administration accomplished over the last four years and move our nation toward a secular and socialistic state,” he said in an online statement.

“Not to be outdone, House Speaker Nancy Pelosi (D-Calif.) is implementing a brazen plan of her own. The first bill introduced in this congressional session is H.R. 1. This bill, disingenuously titled the ‘For the People Act,’ is a massive power grab and seeks to dismantle the fundamental framework of our state-driven republic.”

That explains the “deceptively named ‘For the People Act’” actually would demolish what states want to do to protect their elections.

“H.R. 1 would dramatically increase donor disclosure requirements, severely limiting the ability of non-profit organizations and the individuals who support them to engage in public debate on important issues, including abortion and religious liberty. It would effectively put a target on the backs of those who refuse to bow to cancel culture,” the FRC explained.

“H.R. 1 is also a federal power grab that cripples states’ ability to run elections and increases the likelihood of voter fraud. It would hamper states’ ability to determine voters’ qualifications, ensure the accuracy of voter registration rolls, and determine the district boundary lines for electing their representatives. It would also allow individuals to vote without an ID and would permit online voter registration that is not tied to an existing state record such as a driver’s license. These examples are just the tip of the iceberg!”

Dobson wrote that the bill is even worse than it sounds.

“Among other things, H.R. 1 would use our tax dollars to create a 6-1 match for political contributions up to $200! In other words, you and I would be forced to fund the campaigns of individuals who are diametrically opposed to everything we hold dear. It would also force political non-profits to hand over the names and addresses of their donors. We’ve seen the lengths the left will go to in order to ‘cancel’ anyone who stands in their way. Think of how many freedom-loving Americans would be scared to support the conservative ideals that made this country great, knowing that their names could be made public, and their employers might be pressured to fire them. This is absolutely shameful and constitutes an assault on the First Amendment,” he said.

“The list goes on…convicted felons would be allowed to vote, ineligible voters would be automatically registered, safeguards against fraud would be dismantled, and the Federal Election Commission would be transformed into a partisan organization. This bill is so over-the-top it seems unbelievable. Unfortunately, this nightmare is all too real, and this legislation will become law if we don’t take action.”

He said Americans should contact their members of Congress “today and tell him or her to oppose H.R. 1.”

WND had reported only a day ago on H.R. 1, explaining how J. Christian Adams, president of the Public Interest Legal Foundation and a former Department of Justice, warned that “every bad idea” that created problems in the 2020 election was featured in the bill.

That would include mail-in ballots, ballots without postmarks, late ballots, unvetted voter lists, ballots that missed deadlines and more.

“If you thought the 2020 elections were chaotic, just wait,” he wrote.

He cited has possibly one of the worst outcomes a provision that would allow any state where someone believes “the right to vote is denied” to be deprived of its representation in Congress.

“Without qualification or definition, Congress could rely on [one] sentence unilaterally to cut the number of House members from any state it claims is denying the right to vote,” he said.

In a column for the Gatestone Institute, Adams pointed out the Democrats’ plan criminalizes “anyone who uses state challenge laws to question the eligibility of registrants wrongly.”

And it “prohibits states from conducting list maintenance on the voter rolls. That means deadwood and obsolete registrations will stack up.”

Dobson has authored dozens of books on family, including “The New Dare to Discipline,” “Love for a Lifetime,” “Life on the Edge,” “The New Strong-Willed Child,” “When God Doesn’t Make Sense,” “Bringing up Boys,” “Bringing Up Girls” and more.

He was an associate clinical professor of pediatrics at the University of Southern California School of Medicine for 14 years and on the attending staff of Children’s Hospital of Los Angeles for 17 years. He has been active in governmental affairs and has advised five U.S. presidents on family matters. He earned his Ph.D. from the University of Southern California (1967) in the field of child development.

He holds 17 honorary doctoral degrees, and was inducted in 2008 into The National Radio Hall of Fame.