Israeli PM: You're not protected with only 2 COVID shots 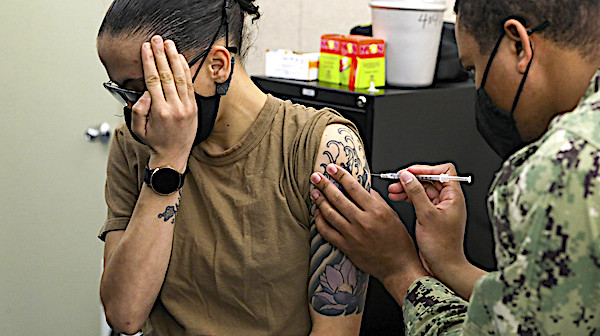 The prime minister of one of the world’s most vaccinated nations, Israel, told citizens the Pfizer vaccine won’t protect them from the COVID-19 variant that is dominating their nation and the United States.

“People who received two vaccine shots walk around feeling like they are protected … they don’t understand that the second vaccine has faded against the delta — they must quickly get vaccinated with the third dose,” said Israeli Prime Minister Naftali Bennett.

His conclusion comports with a study of U.S. long-term care facilities that found vaccine effectiveness against any COVID-19 infection dropped to 53% in late June to early August.

And Pfizer has acknowledged its vaccine’s efficacy decreases over time and that a third dose showed stronger antibodies against the initial COVID virus as well as the beta and delta variants.

The Israeli prime minister was shown on live television Friday receiving a third shot of the Pfizer vaccine after Israel extended its booster campaign for people over 40, Reuters reported.

“If you go get vaccinated with a third shot, we will be able to avoid a fourth lockdown,” Bennett said at the time.

More than 1 million of Israel’s 9.3 million population has received a third shot.

Last Wednesday, the World Health Organization insisted current data did not indicate a need for boosters. The WHO pressed for the most vulnerable people worldwide to be fully vaccinated before wealthy nations administer a booster.

‘A complicated path ahead for America’

In a feature about Israel’s fight against COVID, the Daily Beast reported the massive surge of infections in one of the most vaccinated countries on earth is “pointing to a complicated path ahead for America.”

John Ziegler, a political commentator and columnist for Mediaite, said Tuesday his “extreme confidence in effectiveness of vaccines was misplaced.”

“It was based largely on how well they performed initially in Israel, which is nearly fully vaccinated,” he said on Twitter. “The recent data there is horrible with even deaths now picking up.”

He added that, apparently, former New York Times reporter Alex Berenson, who has reported extensively on the effectiveness as well as the danger side effects of the COVID vaccines,  “was largely right.”

The Daily Beast noted that in June, Israel had several days with zero new COVID infections after launching a national vaccination campaign in December that resulted in 80% of citizens above the age of 12 becoming fully vaccinated.

“COVID, most Israelis thought, had been defeated. All restrictions were lifted and Israelis went back to crowded partying and praying in mask-free venues.”

But two months later, Israel reported 9,831 new diagnosed cases, which was close to the 10,000 recorded at the peak of the third wave.

More than 350 people have died of COVID in the first three weeks of August in Israel, and the directors of seven public hospitals announced that they could no longer admit any coronavirus patients.

“I don’t want to frighten you,” Israeli coronavirus czar Dr. Salman Zarka told the Israeli parliament this week. “But this is the data. Unfortunately, the numbers don’t lie.”