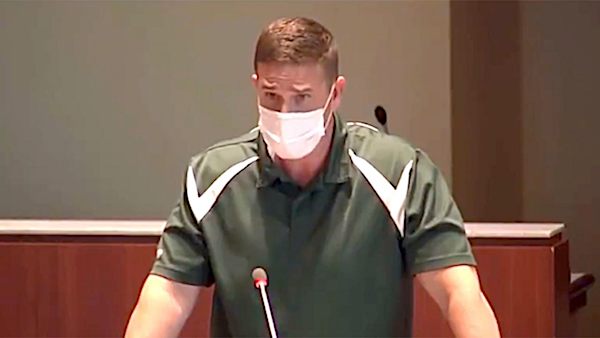 The Virginia Supreme Court on Monday affirmed a lower court’s decision to reinstate Tanner Cross, a physical education teacher at Leesburg Elementary School, to his position after Loudoun County Public Schools suspended him for expressing his views on the board’s transgender agenda.

The district has been ground zero in America for the fight over transgender mandates in public schools in recent weeks, and just days ago formally adopted a policy demanding adherence to the socio-political agenda.

The lower court had ruled Cross’ suspension was likely unconstitutional as it was because of his speech, which is protected by the First Amendment. The school then appealed to the high court.

“Teachers shouldn’t be forced to promote ideologies that are harmful to their students and that they believe are false, nor should they be silenced for commenting at a public meeting,” Tyson Langhofer, counsel for Cross. “The lower court’s decision was a well-reasoned application of the facts to clearly established law, as the Virginia Supreme Court found. But because Loudoun County Public Schools is now requiring all teachers and students to deny truths about what it means to be male and female and compelling them to call students by their chosen pronouns or face punishment, we have moved to amend our lawsuit to challenge that policy on behalf of multiple faculty members. Public employees cannot be forced to contradict their core beliefs just to keep a job.”

The board’s new dictate forces all school district students and staff to refer to “gender-expansive or transgender” students using whatever pronouns they can choose.

In response to the board’s adoption of the mandate, several other teachers are being added to the case as plaintiffs.

When the lower court ordered Cross reinstated, the district near Washington, D.C., decided to double down on its punishment, filing the now-unsuccessful appeal.

At that time, the district insisted, “Leesburg Elementary School and Loudoun County Public Schools experienced – and continue to experience – significant disruption since the May 25 School Board meeting during which Cross addressed the board. Many students and parents at Leesburg Elementary have expressed fear, hurt and disappointment about coming to school. Addressing those concerns is paramount to the school division’s goal to provide a safe, welcoming, and affirming learning environment for all students. While LCPS respects the rights of public-school employees to free speech and free exercise of religion, those rights do not outweigh the rights of students to be educated in a supportive and nurturing environment.”

Actually, the court pointed out there were only a few parental comments that followed the case.

Earlier, Judge James E. Plowman Jr. found there was little evidence of any “disruption,” with only a handful of emails.

Cross had spoken out during May as the board was considering new requirements that would accommodate and promote the transgender agenda. He said as a Christian he could not do that.

He was suspended within 24 hours, when the school claimed his comments caused a “disruption.”

Plowman said, “The court finds that the plaintiff’s speech and religious content are central to the determination made by the defendants to suspend plaintiff’s employment. Defendants shall immediately reinstate the plaintiff to his position as it was prior to the issuance of this suspension and remove the ban that was placed upon him from all buildings and grounds of Loudoun County Public Schools.”

The injunction controlling the school district’s actions is to remain until the end of 2021, unless the fight is resolved earlier during a trial on the issues.

The judge found that the Cross was speaking as a citizen, and on a matter of public concern, and that there was “no actual disruption to school operations” because of his comments.

Further, the judge noted that any loss of First Amendment freedoms, “for even minimal periods of time,” is “irreparable,” and that “similarly situated employees” in the district already have been “chilled from speech” because of the administrators’ actions.

“Enjoining a retaliatory suspension will not serve to harm the defendants,” the judge said. “Further, it will serve to restore, to some degree, the reputation of the plaintiff that may have been harmed by defendants’ actions.”

The judge noted that the district even told the “community” by email of its actions against the teacher and that action was “an unnecessary and vindictive act.”

The fight already has spilled over into the community. WJLA reported the county’s Democrat leadership was targeting Pastor Gary Hamrick of Cornerstone Chapel.

He backed an effort to recall six Loudoun County school board members who were part of the attack on Cross.

He told his congregation, “We’ve got to take back our schools. What are we to do, just throw our arms up, surrender? And allow our kids to be taken over by liberal Marxist ideology?”

He cited the fight facing Cross, who with his wife attends the church.

“Friends, this is now where we are. Jesus calls us to occupy until he comes. Part of occupying is to be what Jesus tells us to be which is salt and light.”

He said the application of those substances sometimes is “very uncomfortable.”

But he said, “to be passive is to be complicit.”

Lissa Savaglio, the chief of the county’s Democrat Party, had accused the pastor of having dangerous opinions.

“Child abuse is a crime. And for him to go up and accuse our school board members of that, I think it is dangerous,” she charged.