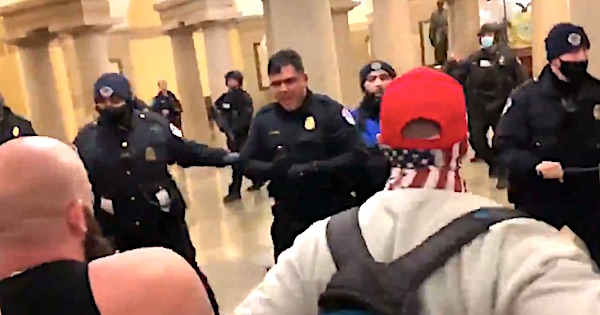 Several House Republicans are demanding Speaker Nancy Pelosi answer questions about her actions and what she knew before the Jan. 6 riot at the Capitol.

She’s not answering. Instead her office issued a statement accusing the Republicans of trying to “deflect” responsibility for the violence away from President Trump, who was acquitted last week on a charge that he incited an insurrection.

“Five weeks have passed since the January 6th attack on the Capitol building, and many important questions about your responsibility for the security of the Capitol remain unanswered. As you are aware, the Speaker of the House is not only the leader of the majority party, but also has enormous institutional responsibilities,” the congressmen wrote.

Pelosi and her staff have exercised a “very heavy-handed and tightly controlled approach” for several years, they pointed out.

When Republicans proposed a bipartisan review, she instead fired Sergeant at Arms Paul Irving and demanded the resignation of Chief of the Capitol Police Steve Sund “in a partisan manner without any consultation of House Republicans.”

They noted Sund had asked ahead of time for National Guard help on Jan. 6 and that Pelosi rejected the request due to the “optics.”

During the riot, Sund again asked for help, but it took more than an hour for it to be authorized, the Congress members wrote.

“End this political charade, and work with us to protect the Capitol and those who work here every day,” they said.

Sund told the Washington Post his requests for more security “were rejected or delayed six times before or during the attack,” the London Independent reported

Instead of addressing the lawmaker’s concerns, however, Drew Hamill, Pelosi’s chief of staff, told Forbes the letter was just a “transparently partisan attempt to lay blame on the speaker.”

“Clearly, these members are trying to deflect responsibility for the Capitol attack from Donald Trump,” said Hammill. “We look forward to these Ranking Members asking these same questions of former Senate Majority Leader Mitch McConnell.”

Nunes told Fox News host Laura Ingraham he knew from speaking with Capitol Police that they were “very concerned” about Jan. 6.

He noted that Senate Democrats had decided to call witnesses during the impeachment trial but suddenly backed off. Nunes said it was because Republicans would then call Pelosi to testify.

“She clearly doesn’t want to answer what happened,” Nunes said.

The California congressman charged Democrats doctored evidence during the trial. And their efforts were backed by establishment media, which were forced to correct their report that Trump supporters killed a police officer by hitting him in the head with a fire extinguisher.

The Republican lawmakers noted Pelosi said during a Jan. 7 press conference that she asked for Sund’s resignation because “hasn’t called us since this happened.”

But the Republicans told Pelosi that Sund actually “detailed two occasions that he briefed you on the situation on the Capitol campus—the first occurring at 5:36 p.m. and the second at 6:25 p.m., both on January 6th.”