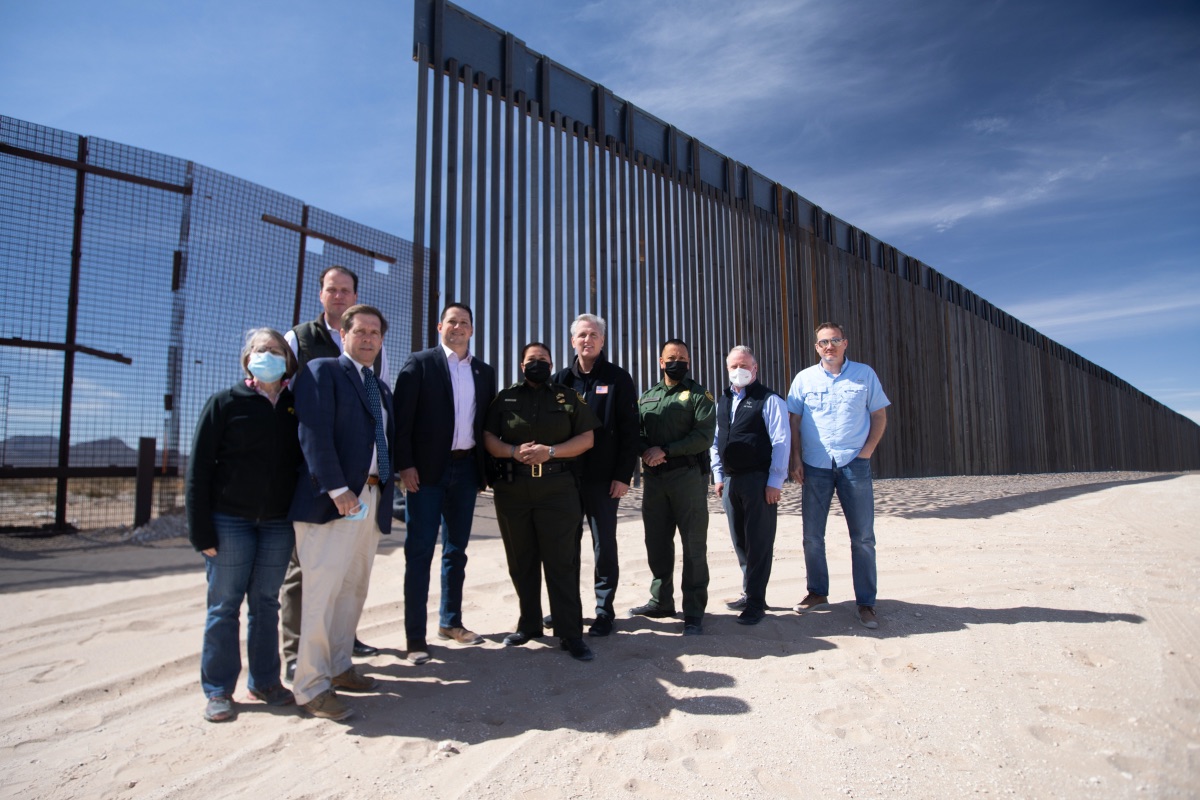 At least four individuals on the FBI’s terrorist screening database have come across our border illegally in recent months. Apprehensions at the border jumped 28 percent last month compared to January.

Democrats are blaming the massive new surge of illegal aliens at the border on former President Donald Trump. But the facts tell a different story. This week House Minority Leader Kevin McCarthy led a 10-member GOP House delegation to the U.S.-Mexico border on a fact-finding mission.

Apprehensions at the border jumped 28 percent last month compared to January. Of the more than 100,000 people apprehended, nearly a third were unaccompanied minors. McCarthy said this is clearly Biden’s border crisis and blamed the president’s catch-and-release policies for inviting migrants to make a dangerous trek to the U.S.

“Every part of what we sat and talked to, we learned more of how it was created,” McCarthy said at a news conference at the border this week. “Congressman Jimenez talked to a family from Honduras and asked how long they’d been traveling, 22 days, just a coincidence of the actions taken by President Biden of why people think they can come here and break the law.”

McCarthy also said people on the FBI’s terrorist screening database watch list had come across the border in recent months.

“I just left a few border agents and I asked them, ‘Who are the individuals you’re catching?’ Yeah, they’re from Central America. But you know who else? Iran, Yemen, Sri Lanka,” explained McCarthy. “When I walked through the facility, there was more Haitians than any other nationality I saw. And why were they coming now? You asked the border agents, they were shocked themselves because they’re being released into the country.”

Democrats immediately questioned McCarthy’s claims, The Washington Post reported. Representative Ruben Gallego (D-AZ) described McCarthy’s words in a tweet as “weird.” Given his role as chairman of the House Subcommittee on Intelligence and Special Operations, Gallego said it was odd that he hadn’t heard anything of terrorists arriving at the border.

Weird as the Chairman of the subcommittee on Intelligence and Special Operations and a border state member of Congress haven’t heard anything about this. Gonna ask for a briefing. Pretty sure he is either wrong or lying. https://t.co/retrzeUPxV

But Axios news has since confirmed with the U.S. Customs and Border Protection that in fact, since October, four people on the FBI watch list have come into our country over our southern border.

McCarthy also expressed concerns about the spread of Covid from illegals coming across the border.

“More than 10% are testing positive, while they’re being stored together,” McCarthy shared. “In a time when the president will keep our country closed, when maybe we have hope for a 4th of July to get together just with our family, how much spread of COVID is he creating every single day by his policies along this border? It’s wrong, and it has to end and it needs to end now.”

Former White House Chief of Staff under President Donald Trump, Mark Meadows, tweeted this about the Biden border crisis, “When Donald Trump was President, Democrat members of Congress couldn’t run to the border fast enough for photoshoots condemning his border security policies. Where are those Democrats now?”

When Donald Trump was President, Democrat members of Congress couldn’t run to the border fast enough for photoshoots condemning his border security policies.

Where are those Democrats now?

“Joe Biden is rewarding human traffickers and coyotes who smuggle illegal aliens across the border. My bill will end these Democrat-created incentives by stopping all immigration during the Biden administration. The ‘Protect America First Act’ will fund and finish the wall, defund sanctuary cities, expedite removal of illegal aliens, repeals Biden’s radical executive orders, and so much more.”

The bill would continue building the southern border wall and name it after Trump, defund sanctuary cities, among other issues including, according to Greene’s website:

Enact a four-year moratorium on immigration and accelerate the time between apprehension and deportation.

[WILL INSERT ALG MINUTE ON BORDER WITH MCCARTHY]

“We have got to put a halt to everything happening to our country,” Greene told Newsmax TV earlier this week. You see, the Democrats are radically changing America, and they’re doing that right now on our southern border. There’s so many people coming across they can’t even keep up with it. Look at all these thousands of children. They’re actually overcrowding.

By eliminating all of Trump’s strong border security executive orders, Biden is putting American lives at risk. It will be difficult for Republicans to pass tough border security measures in Congress, but they may be able to add language in House and Senate appropriation bills to address aspects of the crisis.

This post, House Republicans Demand Immediate End to Biden’s Disastrous Border Policies, was originally published on The Daily Torch and is republished here with permission. Please support their efforts.