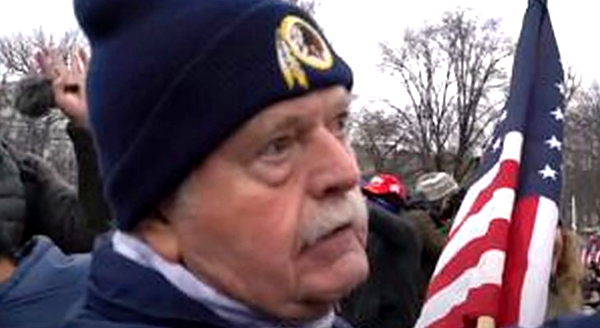 Accused of “plotting an attack on the Capitol” on Jan. 6 even though he never went inside the building that day, 66-year-old Navy veteran Thomas Caldwell spent 49 days in solitary confinement.

“I was defendant No. 1 in a conspiracy,” he explained. “They said I conspired and I actually put together a military-style attack on the Capitol. Then I stormed into the Capitol and did all these terrible things.”

Caldwell said “they even claimed I threatened our lawfully elected representatives in Congress.”

“But they sent that information all around the world, across all the media platforms.”

Caldwell was an FBI section chief from 2009 to 2010 after retiring as a lieutenant commander from the Navy.

Julie Kelly told the Caldwells’ story in a column for American Greatness.

The Navy vet told Kelly there was “a full SWAT team, armored vehicles with a battering ram, and people screaming at me.”

“People who looked like stormtroopers were pointing M4 weapons at me, covering me with red [laser] dots.”

In his interview with Carlson, Caldwell said he and his wife hired a lawyer who demanded that prosecutors present their evidence.

“When they couldn’t produce it, they immediately changed their position,” Caldwell said.

“Now they say the exact opposite of what they said. Originally they said I was the commander of the Oath Keepers. That I did this terrible thing to go inside and attack Congress,” he said.

Now prosecutors acknowledge he wasn’t even a member of Oath Keepers, didn’t plan an attack and didn’t go inside the Capitol.

“But still, Tucker, we’re mired in a legal battle against the government with no end in sight,” Caldwell said.

The couple’s finances “have been decimated.”

“We’re Christians, and we believe God has us in the palm of his hand, [but] things aren’t looking all that great, and we’re at the edge of losing the family farm,” he said.

See the interview with Tucker Carlson: