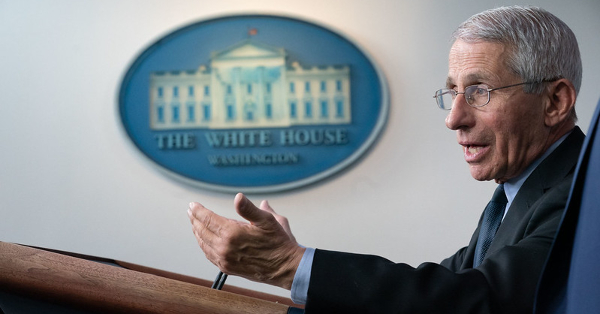 A government watchdog has sued the federal government on behalf of OpenTheBooks.com to obtain access to Anthony Fauci’s financial disclosure records as well as royalties paid to employees of the National Institutes of Health.

“No one is above the law including Dr. Anthony Fauci,” said Adam Andrzejewski, the CEO of OpenTheBooks of Joe Biden’s top COVID-19 adviser.

Fauci has been in the news almost constantly since the pandemic began, but not necessarily in a good way all the time. He’s lectured Americans over and over on what he believes is their proper behavior during a pandemic, which is to give up their rights.

But he’s also faced criticism for flip-flopping on issues – or as some critics have charged, lying to the public.

He’s also been criticized for the fact the American government has contributed financially to research that included work on “gain-of-function” research which is intended to take threats like coronavirus and make them worse.

He’s repeatedly denied that but documents from the NIH show that it did happen.

Andrzejewski continued, “It shouldn’t take a subpoena or a lawsuit to force open basic employment documents that executive-level federal bureaucrats are required by law to file.”

“Anthony Fauci wields unrivaled political power in our federal government, so it is urgent the American people have full access to his financial disclosures,” said Judicial Watch President Tom Fitton. “That we had to file a federal lawsuit about Dr. Fauci’s financial disclosures and other basic employment information raises a host of concerning questions.”

The organization said it filed a lawsuit in federal court in Washington, D.C., after the NIH failed to comply fully with three FOIA requests regarding Fauci’s records.

The further seeks access to his “current job description” and “Any confidentiality agreements, conflict of interest documents, and economic interest disclosure documents pertaining to calendar year 2020 to the present.”

Fauci is the head of the National Institute of Allergy and Infectious Disease, a part of the NIH, and in that position advised President Trump first on COVID issues, then Joe Biden.

Last January, OpenTheBooks discovered that Fauci makes more money, $434,312, than any other federal worker, including the president, and a large portion of that came in a special “permanent pay adjustment” to “compensate him for the level of responsibility … especially as it relates to his work on biodefense research activities.”

Explained OpenTheBooks, “In other words, Fauci was paid to prevent future pandemics.”

Judicial Watch explained it found emails and other records from NIAID officials regarding the Wuhan Institute of Virology in Wuhan, China, the likely source of the COVID-19 disaster, revealing collaborations between the two.

“Also in July 2021, Judicial Watch uncovered CDC records showing that Facebook coordinated closely with the CDC to control the COVID narrative and ‘misinformation’ and that over $3.5 million in free advertising given to the CDC by social media companies,” Judicial Watch reported.