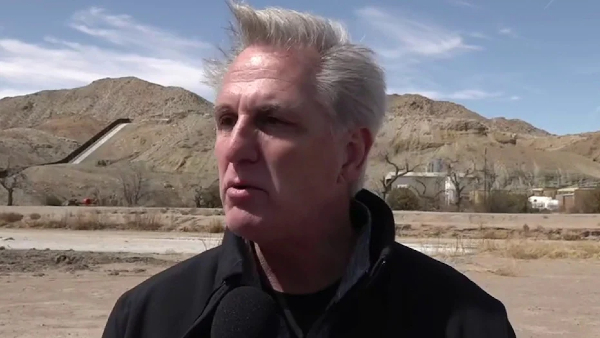 House Minority Leader Kevin McCarthy was fired up Monday after learning of the FBI raid on former President Trump’s Florida estate, warning Attorney General Merrick Garland to be prepared to be put on the hot seat if Republicans retake the House as expected.

On Wednesday, he took aim at members of his own caucus who have remained silent “while Democrats in Washington are abusing their power.”

“If you are an elected Republican, and you are staying quiet while Democrats in Washington are abusing their power, you are the very reason they think they can get away with it,” he wrote on Facebook. “NOW is the time to speak up and be LOUD!”

Breitbart News editor John Nolte pointed out that for “the last five and six years, we have seen local and federal law enforcement, along with the Democrat party and their propagandists in the corporate media, launch one hoax after another at Donald Trump.”

And further, Trump has been “falsely accused of shady business dealings, not paying his taxes, and on and on and on.”

On Monday, McCarthy tweeted a warning to Biden’s attorney general after Trump announced his Mar-a-Lago estate was “under siege.”

The GOP leader said that when Republicans “take back the House, we will conduct immediate oversight of this department, follow the facts, and leave no stone unturned.”

“Attorney General Garland, preserve your documents and clear your calendar.”

‘We can lock in a conservative majority for the decade’
McCarthy recently was on a panel with Newt Gingrich in which the former House speaker praised him for preparing to release a legislative agenda prior to the midterm elections in November, Roll Call reported.

Polls indicate the Republicans will retake the House and Senate from Democrats this fall.

“I believe in this next election, this is a 50-year election. Never before are we going to feel this type of opportunity in a year of redistricting,” McCarthy said July 26 at the Trump-headlined America First Agenda summit. “We can lock in a conservative majority for the decade.”

McCarthy, asked about lessons from the Republicans’ takeover of the House in 1994, said his conference will unveil its agenda in September in a move reminiscent of the “Contract with America.”

“For the last year and a half, every single one of our members have been part of a task force finding solutions. We’ve been coming together; we’re going to meet tomorrow. We’re going to roll part of that out … our commitment to America,” McCarthy said. “We’re going to go back in August, talking and listening to our constituents, finalize it and roll it out in September.”

Previewing policies on energy, crime and foreign affairs, McCarthy said Republicans will “withhold money [from] any prosecutor that doesn’t uphold the law and picks and chooses who they go to prosecute.”