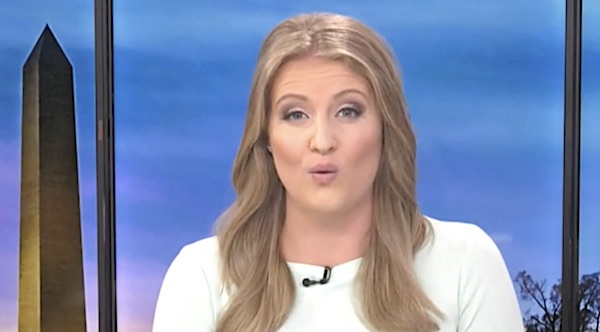 The battle for the heart and soul of the Republican Party intensified Monday night as Jenna Ellis, one of President Trump’s former election lawyers, announced she’s quitting the GOP.

Appearing on “Real America’s Voice,” Ellis blasted the GOP for doing little to defend the former commander in chief.

“Sure, the Republicans claim to be keeping Democrats in check, but only a handful of outsiders are actually speaking up,” she said.

“The rest are compromising on everything. The infrastructure bill, for example. Or the second impeachment hoax, where [Senate GOP Leader Mitch] McConnell actually stood up and ranted against President Trump for his own political gain, not for the truth.”

She also launched into the Republican National Committee.

“What happened to the millions raised by the RNC in November sand December of 2020 – the Trump team never saw a dime of that help,” she stated.

“All of them, including [RNC Chair] Ronna McDaniel, should resign now. Until they do, as of today, I am resigning from the party. I am changing my voter registration and I am no longer a Republican until the party decides that it wants to be conservative again.”

“A compromised, corrupted majority is not a majority worth being a part of. If we genuinely want to create a more perfect union we have to stand up for our principles against the corrupted machine of self-serving politicians in Washington.”

BREAKING: @JennaEllisEsq announces she is leaving the Republican Party.

Meanwhile, as WND reported, a new series of reports reveals that around the 2020 election, a contest that fact-checkers claim was untarnished even though it featured more smoke than this week’s Western wildfires, President Trump was fighting the swamp.

Not just the Democrat swamp, in the person of lifetime Washington personality Joe Biden. The GOP swamp, too.

For example, according to the Gateway Pundit, former Attorney General Bill Barr forbid investigations into allegations of fraud, “even though numerous crimes [were] committed in order to steal the election for Joe Biden.”

And it was revealed that RNC chief counsel Justin Riemer “was questioning why his Republican party colleagues were supporting President Trump’s allegations of voter fraud.”

And when an email was texted to Trump lawyer Jenna Ellis confirming that, and it was passed along to Rudy Giuliani and Bernard Kerik, an RNC spokesman denied it.

And when Ellis confirmed it is true, she was blocked on social media by RNC spokeswoman Ronna McDaniel.

The Gateway Pundit explained Riemer, in fact, abandoned Trump, and on Sunday, “former Trump elections attorney Jenna Ellis tweeted out that the information was true and that the RNC stabbed President Trump and his attorneys in the back and that now the RNC is lying by pretending the accusations are false.”

“On Sunday The Gateway Pundit spoke with a top Trump campaign adviser who was there on the ground in the early days following the 2020 presidential election,” the report explained. “The top Trump campaign insider spoke to us anonymously on what was happening those early days after the election as Democrats were still in the back rooms working to steal the swing states.”

That source said, “Ronna McDaniel promised that RNC Chief Counsel Justin Reimer would be ‘gone by morning’ after his email made the rounds with the Trump campaign team. Then the guy went completely dark for three or four months. But, then he reappeared with the RNC. So those are the details. That is exactly what happened.

“Here is the bottom line. Ronna McDaniels and everyone in the RNC did not want us to fight for the president. They did not want to do it. This is exactly why they are not supporting Rudy. They collected $220 million for legal fees. Where did it go? Because they didn’t spend it on lawyers. That’s for sure damn sure,” the source reported.

The Gateway Pundit report explained, “But we did not know just how early the GOP folded. We found that out in our conversation with the Trump insider.”

That source said RNC headquarters had given up fighting for President Trump on November 5th, “while Democrats in Pennsylvania were still counting votes in Philadelphia behind locked doors!”

It was McDaniel who blocked Ellis after Ellis’ comment that the reports were true.

Earlier, President Trump had sent a cease-and-desist letter to the RNC telling them to quit using his name in fundraisers.

Trump’s team, at the time, believed it to be “just one more example of Trump having to fight the GOP establishment,” the report said.