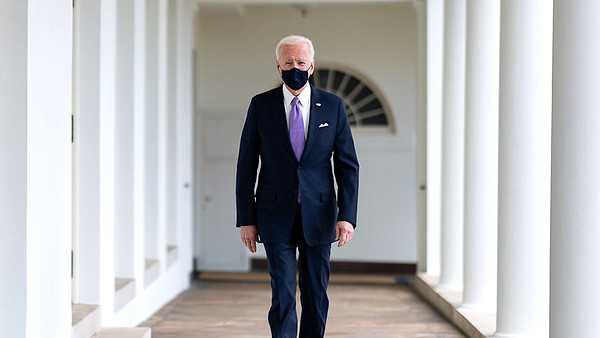 A top election official in Georgia, where the 2020 results triggered allegations of fraud, is pleading with President Biden to quit lying about the state’s new election law.

And he warned that if Biden doesn’t, “Someone is going to get hurt.”

The comments come from Gabriel Sterling, the chief operating officer for the Georgia secretary of state, in a commentary for the Washington Post.

He was upset when President Trump challenged the state’s election results, insisting they were accurate. But now he’s unhappy with Biden, who has falsely claimed that the election integrity law curbs voting hours and makes it illegal for people to get water while in line.

Sterling was blunt in his message to Biden, who has called the Georgia law “Jim Crow on steroids.”

“‘Someone is going to get hurt.’ I made that prediction four months ago regarding misinformation about the 2020 election. I was horrified to see it come true on Jan. 6,” he said.

“The reaction to Georgia’s new election law has me worried again. Though I have not received any threats yet, thankfully, that same foreboding is creeping up again as the president of the United States and others once again spread lies about what is going on in Georgia.”

He continued: “So I plead with the president once again: Someone is going to get hurt. Your words matter. The facts matter. In the weeks and months after Nov. 3, my boss and I, along with local election workers, received death threats because we would not bend to pressure from one president to alter the outcome of the election. It is disappointing to see the new president engage in similarly dangerous hyperbole.”

He explained the new voting integrity law “does not decrease early voting hours, though President Biden falsely claimed otherwise. In fact, early voting hours were expanded by adding an extra mandatory Saturday of early voting and continuing to allow Sunday voting. Early voting hours must be open from at least 9 a.m. to 5 p.m., a step up from the ‘normal business hours’ required by previous law. Counties can extend those hours to 7 a.m. to 7 p.m., as many have done in the past.”

He noted the president also alleged last month that the bill “makes it a crime to provide water to voters while they wait in line.”

“But providing gifts of any value to voters to reward them for casting a ballot has been illegal in Georgia for years. A similar law exists in the president’s home state of Delaware, though it does not specify water or the infinite other things of value that could be used to persuade voters,” Sterling noted. “Georgia’s legislation simply adds a buffer zone to close a loophole in the law that has been taken advantage of in the past.”

He explained the law allows groups to donate water for poll workers to give out.

“Contrary to popular belief, the legislation writes ballot drop boxes into law for the first time in Georgia history. They were created by a temporary emergency rule in Georgia in response to the pandemic last year. Without legislation, drop boxes would be unlawful,” Sterling said.

“Another wild allegation is that changes to the State Election Board allow the legislature to overturn elections. That is false. There is nothing in the bill that allows that and nothing within the Georgia code that gives the election board, let alone the legislature, the power to overturn an election. The law allows the board to remove top elections officials of poorly performing counties after a lengthy review and appeal process. That can be used for elections officials who chronically fail to address long lines, lose absentee ballot applications or mismanage the process overall,” he said.

“The president has also repeated the lie that ‘this is Jim Crow in the 21st century.’ Democrats have clearly realized this is a potential fundraising tactic regardless of the impact on voter confidence. It is no small wonder how a law, which election experts agree expands voting access to all Georgians, could be compared to the vast historical effort to disenfranchise and oppress Black Americans,” said Sterling.

The law, he said, simply “is not what President Biden claims.”

Biden repeatedly has used the “Jim Crow on steroids” claims in his prepared speeches.

Most recently, it was at a meeting of Al Sharpton’s National Action Network.

“At a time when parts of our country are backsliding. The days of Jim Crow, passing laws that harken back to the era of poll taxes, when black people were made to guess how many beans – how many jelly beans in a jar, or count the number of bubbles in a bar of soap before they could cast their ballot.” he said.

Jim Crow laws, dating back to the Civil War, were repealed in the 1960s. The racial segregation measures, named after a black minstrel show character, aimed to “marginalize African Americans by denying them the right to vote, hold jobs, get an education or other opportunities,” says History.com.

During Reconstruction, the website says, “local governments, as well as the national Democratic Party and President Andrew Johnson, thwarted efforts to help black Americans move forward.” The laws were the foundation for segregated water fountains, restrooms, elevators, cemeteries and even bus and train stations.

Biden also has called the Senate filibuster a “relic” of the Jim Crow era.

BlazeTV host Mark Levin said that despite “Jim Crow Joe’s” past affiliations with segregationists, his offensive, racist rhetoric, his cheating in law school, and plagiarism during his presidential campaign, establishment media keeps giving him a pass.

Sharpton also has been given a pass by media. In 1987, he claimed a black girl named Tawana Brawley had been raped by a white man, prosecutor Steven Pagones. Sharpton staged rallies for her, demanding justice. But a grand jury found Brawley’s claims to be false. And while Brawley was ordered to pay hundreds of thousands of dollars in defamation damages to Pagones, neither she nor Sharpton ever apologized for their attack.