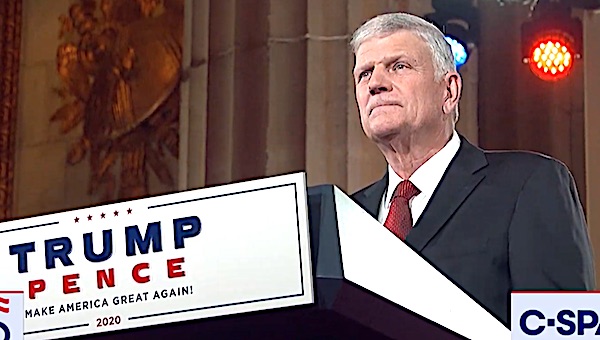 Evangelist Franklin Graham says Americans should be concerned about the increasing government has over their lives in response to the coronavirus pandemic.

“Join me,” he wrote on Facebook, “in praying for an end to the coronavirus, that people can go back to work, that children can go back to school, that churches can go back to being filled with old and young – and maybe even hugs, handshakes, and high-fives can make a comeback!”

His comments were prompted by President Biden’s townhall interview on Tuesday with CNN.

“We do want this president—every president—to do well, but our nation is facing some serious problems,” Graham said.

“President Biden indicated that the coronavirus restrictions could go on through the end of the year. It should be concerning to all Americans that our government has this much control over our lives.”

During the interview, Biden outlined the requirements for children, who are very low risk for COVID, to return to school.

“One, first of all, making sure everybody is wearing protective gear. It’s available to students as well as to teachers, the janitors, the people who work in the cafeteria, the bus drivers. Secondly, organizing in smaller pods, which means that’s why we need more teachers. Instead of a classroom of 30 kids in it, you have three classes in that same of 10 kids each in those, I’m making the number up, less, doesn’t have to be literally 10,” he said.

He also insisted on “smaller classes, more ventilation, making sure that everybody has a mask and is socially distanced, meaning you have less, fewer students in one room. Making sure that everyone from the sanitation workers who work in the lavatories, in the bathrooms and to do all the maintenance, that they are in fact able to be protected as well.”

But he said he expects that next school year the nation won’t be “significantly better off than we are today.”

And he promoted the idea of a $15 minimum wage, which could force small businesses relying on a marginal profit to shutter.

He discounted the Congressional Budget Office warning that it would cost 1.4 million jobs.

And he also linked “former military, former police officers” to “white supremacy” and the riot at the U.S. Capitol last month.

He said: “These guys are not — and women — are, in fact, demented. They are dangerous people.”

Biden promised to attack “systemic racism that exists throughout society. And one of the things I’m going to recommend there is that we look at an entire panoply of things that affect whether or not people of color, primarily, are — are treated differently.”

He also discussed his plans for amnesty for illegal aliens, for forgiving student loan debt for some people, his suggestions for free college, and his hopes of grants to black universities,