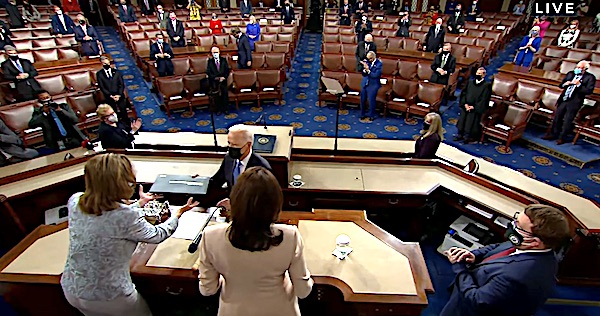 Those are the four highest-ranking individuals who need to be held accountable for the catastrophic failure of Biden foreign policy in Afghanistan, according to two former members of Congress.

“There is broad bipartisan consensus that these four individuals bear much of the responsibility for recent events,” explained Pete Hoekstra and John Shadegg in a commentary at Gatestone Institute.

They note that, “The censure of the president, and three Cabinet members removed from office would send a clear message to the American people, our allies, and our enemies that we have recognized the serious errors that were made in Afghanistan.”

Hoekstra is a former representative from Michigan and later served as U.S. Ambassador to the Kingdom of the Netherlands. Shadegg represented Arizona in Congress.

In fact, Americans and U.S.-supporting locals were stranded under the thumb of the Taliban terrorists in Afghanistan when Joe Biden abruptly ordered the evacuation of American forces.

Also left behind were billions of dollars in American war machinery.

The result, according to reports, is that terrorists once detained in Gitmo now are part of the new Taliban “government,” which is sending execution squads to track down those who resist Islamic extremism, including Christians.

“The disappointing fact is that there is a long and rich list of potential targets. It begins with President Joe ‘The Buck Stops Here’ Biden as the obvious choice. The president bears ultimate responsibility for making the decisions that led to America’s surrender and leaving our citizens behind. The president should be held accountable,” they wrote.

The others should be, too.

“Together, these individuals either counseled the president that they would execute his direction effectively and safely, or they developed and implemented a strategy that they knew would not work. Either scenario would demand that they also be held accountable.”

“There is really no debate about whether the exit plan from Afghanistan failed miserably. Americans left behind, our military equipment left behind, and the Taliban are victorious and now in power while our wartime allies were left blindsided and furious. We lost 13 U.S. service members along with nearly 200 Afghans killed,” they said.

Congress can use impeachment and censure against a president.

“Congress can and should send a definitive statement that President Biden’s actions in regard to Afghanistan have been unacceptable. A censure would be a vote of disapproval of the president’s actions in Afghanistan,” they said.

The others could be “forced to resign.”

Such actions “would make clear that the decisions that were made are not the launch of a new Biden doctrine, but were serious miscalculations in American foreign policy. It also will send a clear message that Congress intends to exert its power as an independent branch of government to influence policy and exercise its War Powers,” they wrote.