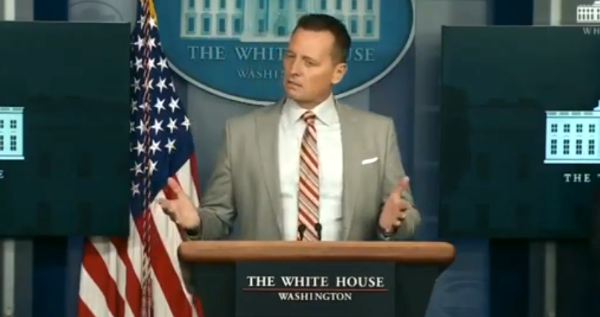 The Biden presidency has brought Americans multiple new experiences. Inflation of nearly 9%. Gasoline more than $5 a gallon. A flood of illegal immigrants at the southern border. A nonstop Washington investigation into the Jan. 6, 2021, riot so that those accused of trespassing at the Capitol can be jailed indefinitely.

And now, according to Richard Grenell, the acting Director of National Intelligence under President Trump, now senior adviser for National Security and Foreign Policy at the American Center for Law and Justice, the need for foreign aid.

In an online posting, he cited the recent and still threatening brush with disaster Americans experienced because of a shutdown of a manufacturing plant and the resulting shortage of baby formula.

Specifically, Grenell referenced a headline that said formula was arriving from Germany on military aircraft.

“The Biden administration needs foreign aid to help feed America’s infants. Mothers in the U.S., like women in the Congo, are reliant on foreigners for generosity. It is hard to overstate the utter failure this headline points to,” Grenell warned.

“The American people are the most generous people in the world, to be sure. When there are humanitarian disasters, wars, drought, refugee crises, or natural disasters, the citizens of the United States respond with money, shelter, official U.S. aid, and prayers. Nonprofit organizations throughout the U.S. also respond in kind. We have a very generous citizenry when others are in need. Americans don’t assume that government agencies are responsible, they respond personally.”

He pointed out American taxes pay 25% of the United Nation’s assessed contributions budget, and another 25% of the U.N.’s 12 peacekeeping operations, totaling billions of dollars.

“We aren’t used to having to rely on foreign aid ourselves – especially to feed our babies. But the Biden administration has been caught completely unprepared and Texas is forced to receive 110,000 pounds of baby formula from Germany on June 9th because the supply chain of infant formula is simply not available in the United States and mothers are panicking,” he said.

“We can’t rely on foreign aid for basic necessities; but baby formula, and other products and commodities, are still in short supply. Shelves are empty and yet the Biden administration is stuck talking about meetings they are having – not shipments of formula. Joe Biden has done too little and has done it too late,” he explained.

Grenell noted that gas prices, grocery bills and more all are concerning.

“But nothing can be more concerning than the United States needing foreign aid to feed our children,” he said.