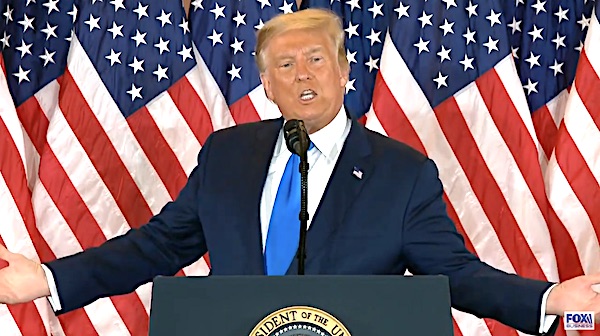 Former President Trump is calling for an investigation of the “insurrection” that happened last Nov. 3.

Democrats and leftists have uniformly used that description for the Jan. 6 events at the U.S. Capitol, where thousands attended a nearby rally with President Trump, and some then walked over to the Capitol building.

Hundreds entered, and some broke windows and doors and vandalized parts of the building. Others walked in while security officers held doors open for them, took selfies, and then left.

Democrats who have admitted one of their goals is to make sure Trump does not run for president again in 2024, which is a possibility although not confirmed yet, immediately pounced on the events and described them as an “insurrection,” worse that the 9/11 terror attack on the United States.

Now, in an interview with the John Solomon Reports podcast, Trump said he’s unconcerned about the idea his former advisers would testify before a partisan House committee investigating Jan. 6.

“I’m mixed, because we did nothing wrong,” Trump said. “So I’m sort of saying why are we hiring lawyers to do this? I’d like to just have everybody go in and say what you have to say.”

What lawmakers need to review, he said, is the “insurrection” that “changed last year’s election rules and committee chairman Bennie Thompson’s ties to a black separatist group whose members killed cops decades ago,” a Just the News report said.

“Trump said the real insurrection occurred in connection with the Nov. 3 election when liberals managed to change the rules for elections in key states to, among other things, treat mail-in ballots like ‘junk mail,’ use insecure drop boxes to collect votes, and extend counting deadlines, all in the name of battling the COVID-19 pandemic,” the report said.

While numerous lawsuits over suspicious events during the 2020 election failed to result in any changes, what is not in question is that state and local officials arbitrarily changed state laws regarding ballots in order to accommodate mail-in votes during the COVID-19 pandemic.

At least one state investigation of that already has found what a retired state supreme court justice describes as evidence of that.

Further, that there was outside influence on the election seems without question, as Facebook’s Mark Zuckerberg handed out some $350 million to mostly leftist election officials to help then obtain their results.

Further, Just the News reported, “Wisconsin’s Supreme Court, for instance, has concluded tens of thousands of voters in that state were unlawfully allowed to declare themselves invalid due to COVID and skip photo ID requirements for absentee voting. Arizona’s Senate just completed an audit that flagged more than 50,000 ballots for problems and further investigation by the state attorney general, a cache of ballots that is five times the margin of Biden’s victory.”

Trump said in the interview mounting evidence of irregularities warrants a pivot by the Jan. 6 committee to investigating election issues.

“We did nothing wrong,” he said in the podcast. “They did something wrong. The investigation should be on the election of November 3, on the presidential election of 2020. That’s what the committee should be set up for. And that should be a select committee, not an unselected committee.”

He also said Thompson needs to be investigated, as documents have been uncovered showing his sympathies early in his career were with a “violent separatist group known as the Republic of New Africa.”

That group wanted to take over several states and create its new home nation there.