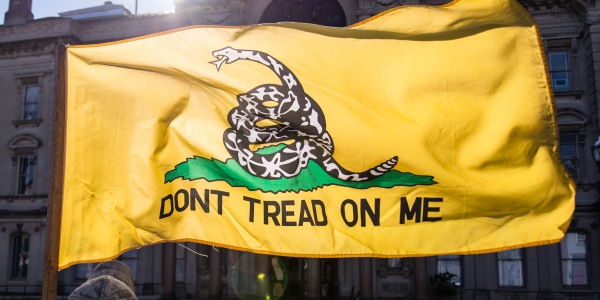 The FBI considers someone who displays a particular emblem representing the Second Amendment as a possible “Militia Violent Extremist,” according to a new report from Project Veritas.

The organization set up by James O’Keefe in 2010 as a nonprofit journalism enterprise to facilitate undercover reporting said it had obtained from a whistleblower an FBI document “which shows how the Bureau classifies American citizens it deems to be potential ‘Militia Violent Extremists.’”

“The FBI cites symbols, images, phrases, events, and individuals that agents should look out for when identifying alleged domestic terrorists,” the report explains about the document marked for “FBI Internal Use Only.”

And under the category, “Commonly Referenced Historical Imagery and Quotes,” the FBI lists Revolutionary War images like the Gadsden Flag and the Betsy Ross Flag.

The report explained under the “Common Phrases and References” section, Ashli Babbitt is cited as a person that MVEs consider to be a martyr.

She was unarmed, and part of the protest at the U.S. Capitol on Jan. 6, 2021, when she was shot and killed by a police officer who has faced no charges for the killing.

Project Veritas, online, explains it “investigates and exposes corruption, dishonesty, self-dealing, waste, fraud, and other misconduct in both public and private institutions to achieve a more ethical and transparent society and to engage in litigation to: protect, defend and expand human and civil rights secured by law, specifically First Amendment rights including promoting the free exchange of ideas in a digital world; combat and defeat censorship of any ideology; promote truthful reporting; and defend freedom of speech and association issues including the right to anonymity.”

A report at Just the News noted, “Symbols listed on the guide also include the ‘Punisher skull’ the Spartan helmet and ‘2A.’ The guide says militant violent extremists, also known as MVEs, ‘justify their existence with the Second Amendment, due to the mention of a ‘well regulated Militia’ as well as the right to bear arms.’”

The report continues, “The same document even references Timothy McVeigh, who killed 168 people during the Oklahoma City, Oklahoma, bombing, as an inspiration for MVEs.”

Just the News pointed out that the leak comes just days after Sen. Chuck Grassley, R-Iowa, warned if “recent accusations of political bias in the FBI are true, it will show that the federal law enforcement agency is ‘substantially corrupted.’”