Fauci: I corrected Trump on COVID ivermectin 'to maintain my integrity' 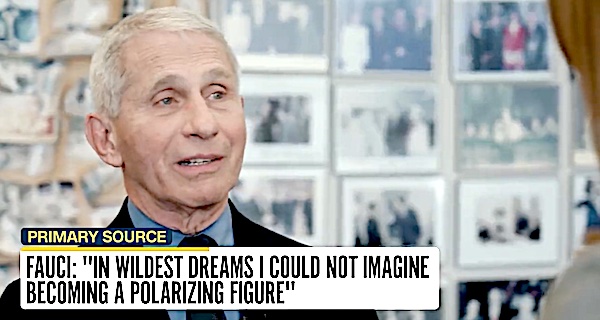 Dr. Anthony Fauci says that to preserve his “integrity,” he had to publicly “correct” President Trump on the validity of ivermectin and hydroxychloroquine as treatments for COVID-19.

In an interview Thursday with CNN, the director of the National Institute of Allergy and Infectious Diseases was asked by Kasie Hunt “about what life has been like for you during the pandemic.”

“I know you have gone from a hero to most Americans to someone who is now viewed as a divisive figure,” Hunt began. “I can’t imagine that that was something you thought that would happen to you when you took this job way back in 1984.”

Fauci replied: “With the divisiveness during the Trump administration, it was no secret that I had to do something that was not pleasant and not comfortable, and I didn’t desire it. I had to be publicly correcting misrepresentation on the part of the president and on the part of people in the administration.”

He complained of “the people who were talking about hydroxychloroquine and ivermectin and the virus is going to go away, it’s going to disappear.”

“I had to maintain my integrity as well as my responsibility to the public to tell them the truth. That clearly alienated a lot of people,” Fauci said.

In fact, when the pandemic began, mass vaccination to quell a pandemic was an unproven novel therapy while physicians and medical scientists around the world were finding success using anti-viral drugs such as ivermectin and hydroxychloroquine.

Esteemed epidemiologist Dr. Harvey Risch of Yale Medical School was among scientists and physicians who said in Senate testimony that thousands of lives could have been saved if the treatments had not been suppressed.

One major problem for the promoters of the experimental vaccines was that they could not be granted emergency use authorization – shrinking the approval time from less give to 10 years to less than one year – if a viable alternative treatment of COVID-19 was available.

Under Fauci’s leadership, physicians were punished, including losing their licenses, for legally treating COVID patients with the drugs off-label.

From 10% to 20% of all prescribed drugs are used off-label. Ivermectin has been shown to be effective as a preventative and early- and late-stage in at least 82 controlled studies. Researchers have demonstrated its ability to inhibit the replication of SARS-CoV-2 as well as its strong anti-inflammatory properties.

One of the physicians punished for treating patients off-label is Dr. Meryl Nass, a Maine clinician and scientist. She points to a 2005 paper published by the CDC showing chloroquine – the stronger form of hydroxychloroquine – was an effective drug against SARS coronaviruses, exhibiting “strong antiviral effects.”

In 2014, scientists at Fauci’s NIAID came to the same conclusion.

“I have to repeat myself because the information is so shocking and I don’t want you to miss it: Our governments already knew of options for treating COVID before it appeared — but instead of immediately trying these already identified, safe, cheap and available drugs, and offering early treatments, they did everything they could to stop people from obtaining the chloroquine drugs,” Nass wrote.

In January, as WND reported, a bill in the Virginia state Senate that would have allowed health-care providers to prescribe ivermectin and hydroxychloroquine was blocked by Democrats after they shut down a public comment session and ordered state Capitol police officers to remove citizens from the chamber.

In February, South Carolina Attorney General Alan Wilson issued a legal opinion concluding hospitals in the state were in violation of the law when they banned doctors from prescribing ivermectin, hydroxychloroquine and other drugs off-label for COVID-19.

Wilson, in his opinion, argued the “physician-patient relationship is given constitutional dimension by the courts and broad – if not absolute – deference in a doctor’s prescribing medications to his or her patient, whether such prescriptions relate to off-label use or not.”

He pointed out that “courts have expressed time and again a reluctance to interfere in the doctor-patient relationship or in the policies of a hospital.”

“The physician who prescribes a drug for ‘off-label’ use is acting in accordance with generally accepted medical practice, as we understand it, and courts have so held,” Wilson said.

McCullough noted on Twitter that he testified to the South Carolina Senate Committee on Medical Affairs, giving “the evidence base for these medications in the early treatment of the illness.”

In January 2021, WND reported, a prominent University of Liverpool researcher published a meta-analysis for the World Health Organization and other leading health agencies indicating the remarkable effectiveness of ivermectin in treating COVID-19, reducing hospitalization by some 80%.

But when the paper’s stated conclusion didn’t match the study’s findings.

Instead of urging physicians around the world who were desperate for solutions to try the safe and effective drug, the researcher, Dr. Andrew Hill, wrote: “Ivermectin should be validated in larger appropriately controlled randomized trials before the results are sufficient for review by regulatory authorities.”

The English researcher’s turnabout was noticed by a colleague, Dr. Tess Lawrie, who confronted Hill in a remarkable Zoom video conversation that was recorded and featured in a short documentary.

WATCH: Dr. Fauci talks to me about what it was like contradicting President Trump and why he’s become a villain on the right #TheSourceKasie

“We have gotten into an arena or an era of what I call the normalization of lies.” @CNN pic.twitter.com/gFf1zWMN2a