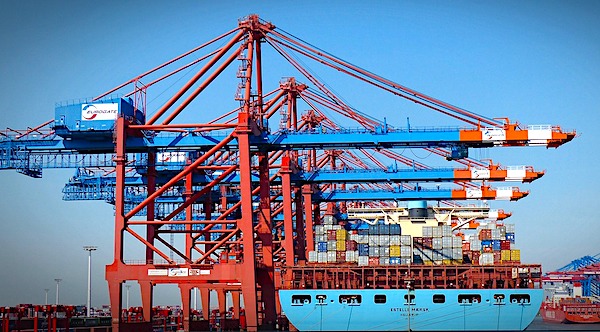 China for several years now has been aggressively buying, or taking part ownership stakes, in seaports around the globe.

And while on the surface it may look like no more than an aggressive effort to solidify its business interests, an analysis from Judith Bergman, a lawyer, columnist, and political analyst at the Gatestone Institute, explains the evidence suggests there’s more.

She wrote, on the institute’s website, that while China’s acquisition of ports does, in fact, “ensure its strategic supply lines,” there’s also the belief “that a military functionality is built into the strategy.”

Bergman cited a 2020 report from the Asia Society Policy Institute, which stated, “A deliberate military and strategic functionality seems clearly entrenched in the initiative. But the security challenge to United States or regional interests does not lie in the risk of a String of Pearls–type chain of overseas coastal fortifications from which the PLA can wage war and that it will defend. There is little evidence so far of Beijing constructing full-blown overseas military bases on the U.S. model, but there is abundant evidence it is developing a network of strategic strongpoints that can significantly raise the costs of any U.S. military intervention and lower the willingness of BRI [port] host governments to offer access or assistance to the United States.”

Bergman pointed out that as of last year, Chinese firms partly owned or operated 95 ports, including 22 in Europe, 20 in the Middle East and North Africa, 18 in the Americas, 18 in South and Southeast Asia, and nine in sub-Saharan Africa.

The largest owner and operator is COSCO Shipping Ports, which also is the world’s third-largest container carrier.

For example, just in May it signed a deal to build a port in Peru, in June in boosted its holdings in Greece, and in September it got 35% stake in Hamburg’s container terminal.

Bergman explained, “The concern that China’s acquisition of commercial ports worldwide might be used for strategic purposes has been reinforced by indications that some COSCO acquisitions have come at such high prices that ‘obtaining those assets is a matter of achieving strategic national security goals rather than a financial investment that will be required to deliver market-based returns’.”

“U.S. naval vessels might not be able to call regularly at ports under Chinese management because of the risk that commercial port information-technology (IT) systems could be used to monitor or interfere with military systems and jeopardize U.S. information and cybersecurity,” he explained.

“For that reason, the U.S. warned Israel that China’s management of the new Haifa port terminal could potentially damage U.S.-Israeli security cooperation, as it might lead to US Navy ships refraining from docking there,” she explained.

She noted that in 2019 in a Naval War College Review article, the concern was emphasized: “By creating a global port network for ostensibly commercial purposes, China has gained the ability to project power through the increased physical presence of its naval vessels—turning the oceans that historically have protected the United States from foreign threats into a venue in which China can challenge U.S. interests.”

There’s also the fact China’s investments give it influence over local actions, such as when China acquired much of the port of Piraeus, Greece, Greece blocked a European Union statement criticizing China’s human rights abuses at the U.N.

Greece said at the time it’s position was that “unproductive and in many cases, selective criticism against specific countries does not facilitate the promotion of human rights in these states, nor the development of their relation with the E.U.”