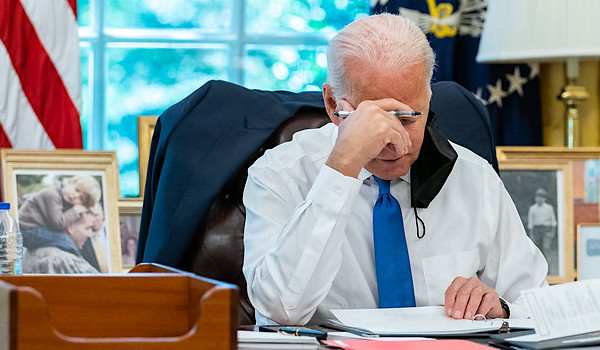 The Democrats’ $1.75 trillion Build Back Better Act actually will cost more than double the sticker price, according to a private non-partisan group.

The Committee for a Responsible Federal Budget estimates, based on past practice by Congress, the bill ultimately will cost nearly $5 trillion.

The group points out the legislation includes a number of “temporary programs” with arbitrary sunsets and expirations. And as President Trump’s one-time director of the Office of Management and Budget points out, once Congress establishes a program with a bureaucracy to manage it, it doesn’t go away.

With an administrative system in place, the programs will “grow each and every year,” said Russ Vought in an interview Friday with Steve Bannon on “War Room.”

Vought, who now heads the non-profit Center for Renewing America, explained that the costs in Build Back Better are “front-loaded,” with the spending designated for the first couple of years.

And then there are “artificial sunsets” — the programs will inevitably be renewed after their expiration dates. Meanwhile, the revenue, including tax hikes, is spread out over 10 years.

The Wall Street Journal has called it “the most dishonest spending bill in American history.”

‘Never in American history’
In a floor speech that lasted eight hours, Republican Minority Leader Kevin McCarthy described the legislation as the “single most reckless and irresponsible spending bill in our nation’s history.” He said Democratic lawmakers were “out of touch” with ordinary Americans.

The price tag may be much higher, some economists believe, because the CRFB estimate is based on the scoring of the bill by the Congressional Budget Office, which doesn’t take into account many real-world factors that typically impact such legislation.

At the White House on Friday, Fox News reporter Peter Doocy asked Biden spokeswoman Jen Psaki if the CBO’s score means Biden lied, particularly since he once called the CBO the “gold standard.”

Doocy also pointed out that during the Trump administration, Psaki chided Mick Mulvaney, Trump’s first OMB director, suggesting he would “try to walk away from the CBO.”

Psaki insisted that the bill’s controversial provision of $78.9 billion to hire an army of new IRS agents to audit American taxpayers will make up the additional revenue needed to bring the cost to zero.

The bill now goes to the Senate, where with 50 Republican senators in opposition, it will need the vote of Democratic Sen. Joe Manchin, representing conservative West Virginia, who already has pushed out elements he didn’t like.

‘Panic mode’
On “War Room,” Bannon noted to Vought that Biden is “in panic mode because of inflation,” which could hit 7% by the end of the year, and the bill is being pitched as an antidote to inflation.

But Vought believes that without any economic-growth policies, the legislation will only make inflation worse.

“When this was President Trump, we took a short-term hit on the deficit, even though we were going to pay for it in full, because we had actual pro-growth policies in there,” he said.

“They don’t have that. They have policies that just take more and more from entrepreneurs and businesses across this country, and then redirect it to utterly things that do no create economic growth.”

Bannon pointed out that the bill, the continuing resolution keeping the government funded, and the debt ceiling deadline will all converge next month, creating a “massive firestorm politically.”

Vought urged citizens to contact their senators and House member and express opposition to the continuing resolution, the temporary measure to fund the federal government and “kick the can down the road” for 90-day periods.

He explained that when Democrats are able to keep passing continuing resolutions until they get to a debt-ceiling deadline, it gives them political leverage. Democrats then can pressure Republicans with the prospect of “Wall Street freaking out” over a government shutdown.

“We need to defeat it in December,” he said.

“There’s a great deal of trickery involved in Build Back Better,” he said.

He pointed out, as an example, that the enhanced child care allowance is costed at $130 billion a year.

But that’s only because it expires in one year, and Varney argues it will never be repealed.

“Which politician is going to say, ‘Oh, no, no, no, you kids, you parents, you can’t have that money any longer.’”

Varney contended the same is true of the Obamacare subsidies, the earned income tax credit and many others entitlements and programs.

Further, he also believes the Build Back Better Act will exacerbate inflation, describing it as a kind of tax on everyone, with the poor suffering the most. And it is poised to bring about a debt crisis, with borrowing by the trillions.

And that, he warned, would lead to higher interest rates and a recession.

See Varney’s monologue on his FBN show on Build Back Better:

Watch the latest video at foxbusiness.com