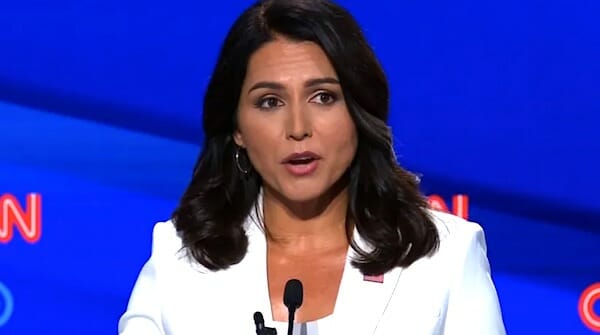 Tulsi Gabbard, who represented Hawaii in Congress for several years and then staged a brief campaign seeking the Democratic nomination for president for the 2020 election, has had some harsh words for the Joe Biden administration.

They should stop lying, according to Gabbard.

“The faith and trust that the American people need to have in our leaders is dropping every day,” she said during a weekend appearance on “Justice with Judge Jeanine,” Fox News reported.

She noted lies to the American people reveal “the arrogance and the self-serving nature of leaders who are in power in this country and the disrespect that they have for the American people and it’s why people are losing faith and trust in those leaders.”

“And that’s the problem here is we don’t have leaders who … put themselves ahead of the interests of the people,” she said.

“The Department of Homeland Security secretary recently told Congress: ‘Our borders are secure.’ This is what he said.”

Gabbard represented Hawaii’s 2nd congressional district from 2013 to 2021. A U.S. Army Reserve officer, she was the first Samoan-American voting member of Congress.

Her campaign for the presidential nomination was short, lasting only from January 2019 into March, when she polled in the low single digits.

“The Biden-Harris administration has an open-door policy at the borders,” she said. “The reality is that people are being let in and crossing the border every single day.”

Fox News confirmed that under Biden, encounters between Border Patrol and illegal aliens totaled more than 200,000 in August, up 300% from a year earlier.

“Actions speak louder and louder than words,” Gabbard said. “[I]t doesn’t matter how many times Secretary [Antony] Blinken or Kamala Harris or anyone from the administration says, you know, don’t come across the border.

“These drug cartels, these human traffickers, they are incredibly emboldened to the point where they feel that they can do this without consequence, where they feel they can continue profiting off of trafficking people across these borders that are essentially open … The fact is that the open-door policy that this administration has in place is posing a humanitarian crisis is creating a humanitarian crisis, as well as a very serious security threat for our country,” she said.