EPA sued over Colorado mine catastrophe 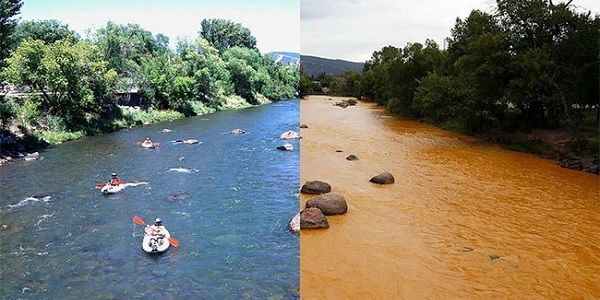 The Environmental Protection Agency has been sued for taking over property adjacent to the 2015 Gold King Mine catastrophe in Colorado to stage cleanup equipment and projects, and keeping it, never paying for it or even for renting it.

The case seeks millions of dollars in damages and has been submitted to the U.S. Court of Federal Claims by the New Civil Liberties Alliance on behalf of landowner Todd Hennis.

The complaint blames the EPA entirely for the disaster that released millions of gallons of acid mine water into the Animas River, turning it a bright gold, which remains in evidence even now.

That morning, the EPA “dug away tons of rock and debris that blocked the portal of the Gold King Mine near Silverton, Colorado,” the NCLA explained. “By breaching the closed portal of the mine, without taking proper precautions or obtaining the owner’s permission, EPA triggered a massive blowout that released over 3,000,000 gallons of acid mine drainage and 880,000 pounds of heavy metals onto the private property below and into the waterways downstream (including the Animas River). It took the form of a bright, yellow-orange toxic sludge, and the pollution lingers to this day.”

In response to the disaster, Ennis gave verbal permission for the EPA to temporarily use a part of his property, adjacent to mine, “for an emergency staging area for equipment and supplies.”

But, “rather than thank Mr. Hennis for his quick cooperation and compensate him for the use of his land, EPA took advantage of him. Without so much as a phone call or email to Mr. Hennis, EPA constructed a $2.3 million dollar water treatment facility on a concrete slab on Hennis’s property. Worse yet, EPA has repeatedly refused—across three presidential administrations—to pay him anything for the privilege,” the legal team explained.

Critically, “Hennis never granted EPA permission to construct a water treatment facility on his property, nor did he authorize EPA to occupy, use, and pollute his property indefinitely. Yet that is exactly what the agency has done.”

The result is that the EPA took the Hennis property “without just compensation” in violation of the U.S. Constitution’s protection for private property under the Fifth Amendment.

“Adding insult to injury, the government has threatened Mr. Hennis with soul-crushing civil penalties should he attempt to exercise his constitutional rights to exclude EPA from his property. When Mr. Hennis refused to sign an eight-year ‘Consent for Access to Property’ that would have paid him nothing, EPA issued a civil enforcement action against him. The agency has threatened that he will be subject to penalties of up to $59,017 per day for any period of time during which EPA believes he is not complying with its demands,” the NCLA explained.

“The Fifth Amendment to the U.S. Constitution provides that ‘nor shall any person … be deprived of life, liberty, or property, without due process of law; nor shall private property be taken for public use without just compensation.’ Where the government requires an owner to suffer a permanent physical invasion of his property—however minor—a takings under the Fifth Amendment has occurred, and the government must provide just compensation,” the legal team explained.

“It is simply unfathomable to believe that EPA could breach Mr. Hennis’s mine, unleash an environmental hell on him and everyone downstream, ensure that no public employee is held accountable, construct a water treatment facility on his property without notice or permission, and refuse to compensate him as required by the Fifth Amendment. This case is about EPA’s horrific environmental negligence and the civil liberties abuse that it has inflicted upon Mr. Hennis and his property while trying to clean up their mess. Americans deserve better,” explained Harriet Hageman, senior counsel for the NCLA.

The EPA crews that breached the mine and unleashed the millions of gallons of water had been at the site under a temporary permission agreement from Hennis, who had been threatened by the EPA with tens of thousands of dollars in daily fines if he withheld permission. The EPA then forced him to sign various short-term access agreements under threats, the complaint outlines.

The workers also violated the EPA’s own protocols and procedures in opening the mine and releasing the contaminated water, the case explains.

The EPA had waited an entire day “before notifying downstream mayors, health officials, families, farmers, ranchers, fishermen and recreationists that the water they were using, drinking, irrigating with, and paddling in was contaminated…”

“It is thus irrefutable that the United States is responsible for all of the damages, injury, loss of revenue, and consequences of breaching the Gold King Mine, and for ensuring that anyone affected by this disaster, including Plaintiff Hennis whose property was taken by the United States to respond to said disaster, is property, fairly and adequately compensated and made whole,” the complaint charges.