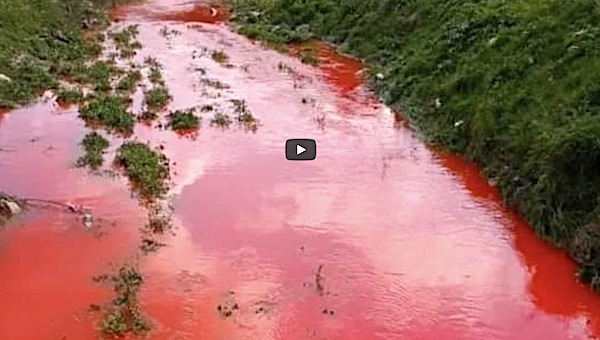 A river in the Holy Land has turned blood red, evoking images in biblical prophecy, but officials have provided a rather mundane explanation.

Somebody polluted it with red paint.

Adam Eliyahu Berkowitz at Israel 365 reported it was in Wadi al-Nabaa, a river near the Arab village of Qarawat Bani Zaid in Samaria, which is part of the Palestinian Territories.

The Al-Bayan newspaper said the council in the village wrote on Twitter: “What happened today of pollution to the environment is due to the pouring damaged paint materials into the valley, which led to a change in the color of the water. To red.”

Berkowitz explained: “Despite the mundane explanation offered by the authorities, many Arab-language social media commenters emphasized the Biblical connotations, likening it to a ‘River of Blood.’ In Islam, there are five plagues i.e. floods, locusts, lice, toads, and turning of drinking water into blood, while in the Bible there are 10 plagues i.e. water in to blood, frogs, lice, wild animals, diseased livestock boils, storms of fire, locusts, darkness and death of firstborn.”

No matter the cause, the visual image recalls the first plague to strike Egypt in the book of Exodus. That’s when God gave instructions to take a rod and stretch “thy hand over the waters of Egypt, over their rivers, over their streams, and over their pools and … they may become blood.”

Rabbi Yosef Dayan pointed out the differences between then and now.

“The Arabs in Israel are not at all like the Egyptians. The Egyptians enslaved us, thereby preventing us from coming into Israel. The Arabs in Israel are trying to prevent us from fulfilling God’s commandment of dwelling in the land. Egypt’s military physically prevented the children of Israel from leaving. Today, it is the Jews, albeit only some Jews, who are preventing us from fulfilling God’s commandment,” he said.

The report said Jewish tradition notes the 10 plagues will reappear before the coming of the Messiah.

Israel365 explained: “Nahmanides, a prominent 12th century Torah scholar from Spain, wrote in his commentary on the plagues that the primary reason God punished the Egyptians was not for enslaving the Israelite people, but for dismissing God and his influence in their life.”

At the time, Berkowitz, writing for Breaking News Israel, explained: “The Linthipe River in Dedza, Africa, turned blood red last Wednesday, shocking residents living along the river. The river is the center of life in the village and the women were the first to notice the phenomenon when they came to do laundry in the afternoon.”

And a report from Malawi 24 quoted one woman saying: “As usual, we came to this place to wash our clothes besides drawing water for home use. But to our surprise we saw that blood like stuff was flowing in the river. This scared us and we called some people to witness the bizarre circumstances.”

The same thing happened in Jayapura, on Indonesia’s island of New Guinea.

The causes of the color change have not always been determined. Some have speculated an organic cause, such as algea.

While a waterway suddenly turning red can be shocking, the phenomenon is not uncommon. WND reported in 2013 a similar, sudden change in the canals of Nootdorp, South Holland, in the Netherlands.

In the prophetic book of Revelation, the Scriptures foretell a time when oceans and rivers will flow with blood again.

Revelation 8:8 states, “And the second angel sounded, and as it were a great mountain burning with fire was cast into the sea; and the third part of the sea became blood.”