Emails show how FBI's use of news reporters backfired 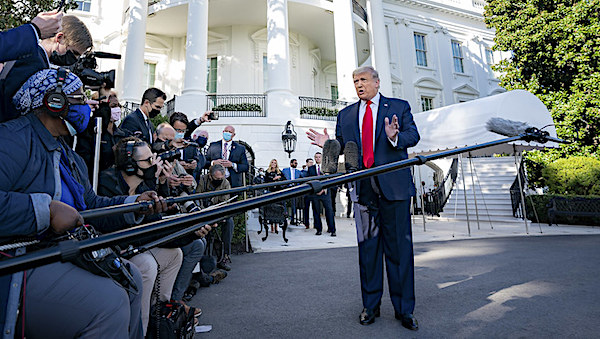 The FBI tried to use its relationship with reporters to amplify its political message in the now-debunked Russia collusion investigation – but it often backfired because of the failures of the media, according to a new investigative report from Just the News.

The organization has been diligent in prying out from government control many of the email and other conversations that were going on among government officials in the Barack Obama administration’s weaponization of the nation’s intelligence agencies against then-candidate and soon-to-be President Donald Trump.

The newest documents reveal that it was shortly after President Trump won the White House that senior FBI officials experienced “heartburn” about coverage of their “burgeoning Russia collusion controversy and the lingering Hillary Clinton email scandal.”

While Democrats alleged – literally for years – that Trump’s 2016 campaign colluded with Russia, FBI special counsel Robert Mueller debunked that. Further, evidence that has been uncovered that the Hillary Clinton campaign funded much of the “evidence” that was created to support the collusion claims, and it happened probably because Hillary Clinton wanted to divert the public’s attention away from the scandal she was embroiled in.

That was her placement of national secrets on an unsecure private computer server while she was secretary of state for Obama.

Just the News found that, at a time when the FBI recently had terminated its primary informant in the Russia probe, Christopher Steele, for leaking information, inaccurate media reports exploded.

“Yes, the headline is REALLY misleading,” Lisa Page, who then was a lawyer for the bureau, told a colleague in a text message concerning a New York Times article that day.

The article was not identified, but Page makes clear the story probably was part of an effort by the FBI to promote itself, which backfired. She wrote, “My guess is we ‘suggested’ a good news story about the Bu … To remind people that we are still the good guys trying to keep America safe and not political operatives who sway elections.”

Page’s colleague said another official saw the headline and “flipped out.”

That person continued, “I’m glad it was so superficial. If they decide to start digging deep, we are screwed on trying to protect some of our stuff related to that case.”

Just the News explained, “Thousands of FBI text messages declassified over the last three years from the Russia and Clinton email capers lay bare a bureau that frequently leaked to reporters, with some senior officials being on a first name basis with reporters at outlets like the New York Times, CNN, the Wall Street Journal and ABC News. But the outcome often frustrated the FBI, which viewed the resulting articles to be wildly inaccurate, misleading or breathless, creating a false storyline of Russia collusion.”

Further uncovered was a complaint from one FBI official, to another: “The rewrite headline is still wrong,” on his concern over a Washington Post claim the FBI agreed with the CIA that Russia tried to help Trump win the election.

“And OPA [office of public affairs] wasn’t able to get the stupid WP headline changed,” another texted, according to the report.

The collusion claims erupted before the 2016 election, and centered around Steele’s wild accusations that even Steele’s claimed “source” for them disavowed.

The charged – and false – statements about Trump were manipulated into the public sphere by Obama officials, and were used by Democrats to hinder President Trump’s agenda for years.

Several FBI employees eventually were dismissed, or resigned, because of the fallout, including Peter Strzok, who once was the chief agent for the Russia “collusion” conspiracy theory.

But even he, too, was unhappy with the media, Just the News reported.

“For instance, when a colleague wrote him on Jan. 19, 2017, the day before Trump took office, to say that he was ‘angry about the times articles. This just has to stop,’ Strzok fired right back,” the report said. “‘Yeah, and it’s not even news!’ Strzok wrote back. ‘No substance, and largely wrong. The press is going to undermine its credibility.’”

Even Strzok, who in own online conversations with friends complained repeatedly about Trump, went to his defense when the Times coverage included “nine falsehoods” in one story.

“We are unaware of ANY Trump advisers engaging in conversations with Russian intel officials,” Strzok wrote, completely debunking the headline. “Our coverage has not revealed contact between Russian intelligence officers and the Trump team.”

The report explained, however, that while the FBI was complaining about the inaccuracy of reports, senior FBI officials, especially then-Deputy Director Andrew McCabe, who later was fired for lying about leaking, “often texted with reporters at the New York Times and other news organizations.”