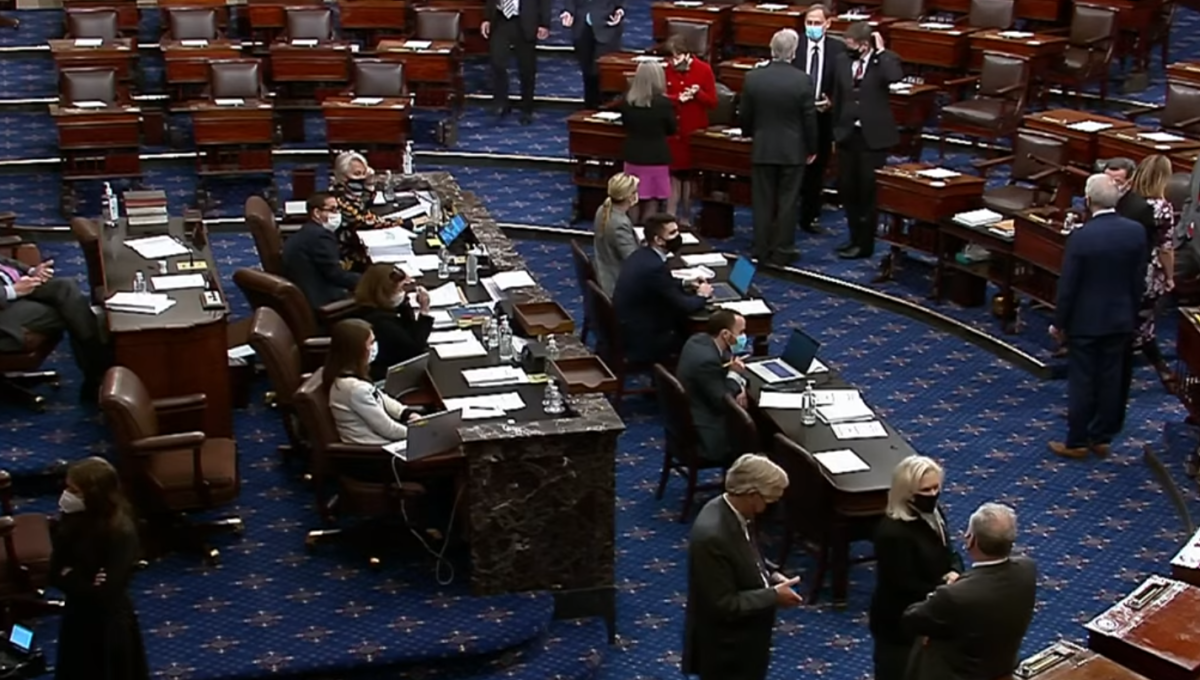 Sen. McConnell offered up his policy wish list should Democrats eliminate the filibuster rule, and Republicans regain the majority. ALG has its own legislative wish list under such a scenario.

Just weeks into Joe Biden’s presidency, it is clear that he faces considerable obstacles in pursuing his agenda in Congress. The Senate cloture rule—which requires 60 votes to cut off debate on most measures—is probably the highest hurdle.

Key Senate Democrats along with President Joe Biden have indicated they are open to the idea of eliminating the filibuster rule to pass their far-left agenda. The filibuster is just one of 44 standing rules in the Senate. Each is designed to enhance the rights of the individual senators, at the expense of the majority.

Senator Mitch McConnell said if Democrats remove the filibuster rule, it may lead to what he calls a scorched earth policy when Republicans regain the majority. He says conservatives wouldn’t just erase every liberal change that hurt the country, they would pass conservative policies with zero input from the other side.

McConnell put forward his policy wish list said last week on the Senate floor, “How about this? Nationwide right to work, or working America defunding Planned Parenthood and sanctuary cities on day one, a whole new era of domestic energy production, sweeping new protections for conscience, and the right to life of the unborn.”

That got us thinking at Americans for Limited Government (ALG) about our policy wish list. Our top legislative reforms if Republicans held the majority in the Senate and didn’t have to contend with the filibuster rule include:

Because it is so large, our federal workforce has become unwieldy and unresponsive to the American people. As we saw during the Trump administration, senior and mid-level bureaucrats used their positions within the system to undermine the president’s agenda, thus thwarting the will of the American people.

We propose the following reforms:

Vastly expanding the number of part-time workers, and job-sharers, in the process meeting the needs of the modern workforce, while reducing overall personnel costs for taxpayers. This was first tried in the 1970s when Congress  passed into law Federal Employees Part-Time Career Employment Act that “Requires the heads of specified Federal agencies to establish and maintain a program for part-time career employment consisting of 16 to 32 hours a week.” Yet, 43 years later, the law has hardly been implemented and fully utilized. As of Dec. 2019, according to the Office of Personnel Management’s (OPM) FedScope, there were just 105,000 part-time workers, and just 291 job-sharers in the entire federal workforce. It was a good idea in the late 1970s, it’s great idea today.

In the process the government should complete performance evaluations for existing personnel to identify non-productive dead weight in the system.

Finally, Congress should consider passing the MERIT Act by U.S. Rep. Barry Loudermilk (R-Ga.) and Sen. David Perdue (R-Ga.) that would expedite the removal of poorly performing federal workers, who are otherwise lazy, incompetent, or recalcitrant by applying the same procedures that were put into place in 2018 to reform the Department of Veterans Affairs across the entire civil service.

Right now, it can take years just to terminate an employee with cause. In a modern workplace, that is simply ludicrous.

With the federal government still working from home to a large extent, this is the perfect time to reevaluate the current structure of the civil service with an eye to modernization, flexibility and increasing efficiency. And President Donald Trump, with his prior experience as a private employer, is just the right person to lead that effort.

As evidenced by credible allegations of voter fraud and abuse in the 2020 presidential election, it is clear we would benefit from a national voter identification requirement. We would also be wise to restrict absentee voting to only those cases where it is absolutely necessary, such as our military member deployed overseas, and restrict early voting to two weeks prior to the election.

“What we saw in last November’s election should never be repeated,” said ALG President Rick Manning. “The fact is, we do not have enough safeguard in place to stop cheaters.  A majority of the 75 million Americans for voted for Donald Trump in November believe voter fraud occurred and may have cost Trump the election. That is not a healthy republic. We must do everything we can to ensure that voters have faith and confidence in the system.”

The outgoing Obama administration weaponized our intelligence community to spy on the Trump campaign and presidential transition team. They did so using the Foreign Intelligence Surveillance Act (FISA) courts, established in 1978, and greatly expanded under the 2001 USA Patriot Act.

FISA allows the government to spy on U.S. citizens for the purpose of gathering intelligence without needing an underlying crime to investigate. It was on this basis that former National Security Advisor Lt. Gen. Michael Flynn had surveillance conducted on him that was transformed into a criminal investigation on the flimsiest of grounds.

No federal judge had issued a warrant to question Flynn, nor was Flynn advised of his rights. And yet, the FBI used surveillance on his Dec. 29, 2016 conversation he had with Russian ambassador Sergei Kislyak during the presidential transition, which was then maliciously leaked to the Washington Post on Jan. 12, 2017, as a basis to quiz Flynn about it on Jan. 24, 2017.

The ostensible reason to run the FBI at Flynn was supposed violations of the centuries-old, never-prosecuted Logan Act, but Flynn had already been discounted as a potential Russian agent on Jan. 4, 2017 as a part of its own at the time ongoing investigation into the Trump campaign on false allegations the President and his team had coordinated the Wikileaks hacks of the DNC and John Podesta with Russia.

Turns out none of it was true. As former Special Counsel Robert Mueller stated in his report: “[T]he investigation did not establish that members of the Trump Campaign conspired or coordinated with the Russian government in its election interference activities,” and “the evidence does not establish that the President was involved in an underlying crime related to Russian election interference.”

Congress could include political or ideological affiliation as a protected class under federal civil rights law including housing, banking, education and public accommodations, including the Internet.

Doing this would stop political deplatforming not just on the Internet, but in financial services, housing and education dead in its tracks by expanding the civil rights franchise. In contrast with potential alternatives like antitrust or declaring social media or the Internet a public utility, this option is narrow and confined to the conduct people are objecting to.

Censorship is wrong and so is discrimination in services provided, whether on the basis of race, sex or politics. It’s time for conservatives to get serious about this issue.

But circling back to the issue of the filibuster itself. It isn’t the problem. The Senate isn’t broken. All that’s really standing in the way of good legislation is a Democratic majority unwilling to compromise on any aspect of their radical agenda.

This post, Eliminating filibuster could unleash a ‘scorched earth policy’ which arguably could help conservatives, was originally published on The Daily Torch and is republished here with permission. Please support their efforts.