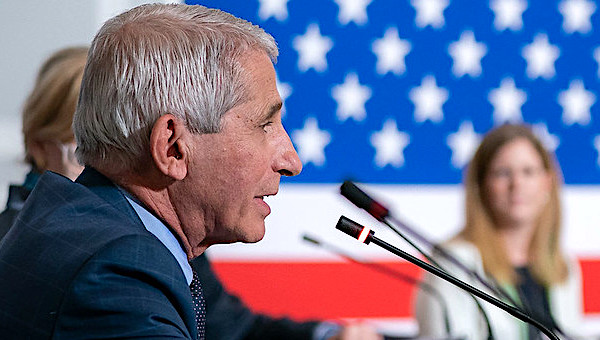 Dr. Robert Malone, who as a leading vaccine expert has known Dr. Anthony Fauci for decades, said he wasn’t surprised by the White House coronavirus adviser’s insistence that people continue to trust cloth masks, despite the growing acknowledgment that they don’t stop the spread of the virus.

“It’s Tony. What can I say? Tony has no integrity. He lies all of the time,” Malone said in an interview Monday night with Fox News’ Laura Ingraham.

“And me and my peers have been watching this for decades. We just shrug our shoulders and shake our heads and say it’s Fauci.”

Malone was commenting on a CNN “State of the Union” interview Sunday in which Fauci was asked if “cotton and surgical masks are effective at stopping the spread of omicron.”

“Yeah,” Fauci replied. “When the CDC said they are effective, in fact they are.”

In March 2020, the CDC said masks “are usually not recommended” in “non-health care settings.” The executive director of the World Health Organization health emergencies program, Dr. Mike Ryan, said at the same time that there was “no specific evidence to suggest that the wearing of masks by the mass population has any potential benefit.”

“In fact, there’s some evidence to suggest the opposite in the misuse of wearing a mask properly or fitting it properly,” he said.

The World Health Organization at the time recommended people not wear face masks unless they are sick with COVID-19 or caring for someone who is sick.

Fauci, in a March 2020 interview with “60 Minutes,” presented the WHO’s and the CDC’s guidance at the time when he said there’s “no reason to be walking around with a mask” in “the middle of an outbreak,” warning of “unintended consequences.”

Fauci has declared under oath that the National Institutes of Health did not fund the dangerous gain-of-function virus research in China that now is believed be the origin of the COVID-19 pandemic. But the NIH admitted in October in a letter to the leading Republican on the House Oversight Committee that the U.S. funded an experiment at the Wuhan Institute of Virology in which a bat coronavirus was modified, creating a virus that made mice “sicker” than the original virus.

Sen. Rand Paul, R-Ky., who has repeatedly sparred with Fauci in Senate hearings over funding of the Wuhan lab, said in December he thinks Fauci “should go to prison for five years for lying to Congress.”

Malone acknowledged that a tightly fitted N-95 mask, when worn properly can curb the spread, but they’re not feasible for school children, for example.

In any case, he said, omicron is as contagious as the measles.

“We’re all going to get infected,” said Malone, who has been a leading proponent of early treatment through repurposed drugs and taking into account natural immunity.

Malone, who was banned from Twitter last week, mentioned his relationship with Fauci in a summary of his background during his blockbuster three-hour interview with Joe Rogan.

Early in his career, he was involved in the development of an AIDS vaccine then worked for the prestigious Salk Institute in gene therapy research, where he helped develop the mRNA vaccine technology, garnering 10 patents. He eventually transitioned from academics to “focusing on making things that work for people.” He worked for a vaccine company that had contracts for all of the biodefense products for the Defense Department. He has run more than 100 clinical trials, mostly related to vaccines but also in drug repurposing.

“I’ve been involved in every major outbreak since AIDS,” he said. “This is kind of what I do.”

Malone said he has won billions of dollars in federal grants and contracts. And he often is brought in by the National Institutes of Health to serve as a study section chairman for awarding $80 to $120 million contracts in vaccines and biodefense.

He has spend countless hours at CDC meetings and has many friends at the agency and in the intelligence agencies.

Fauci has been the director of the National Institute for Allergy and Infectious Diseases since 1984.

In a video interview with WND on Dec. 20, Malone said the new omicron variant could turn out to be “a Christmas present,” serving as a natural vaccine because it appears to be more contagious than previous variants but with much milder symptoms, akin to the common cold.